Defensive tackle Xavier Kelly channels his creative energy into his art, and now, it’s carrying him places he never imagined

Those who assume football and fine arts are mutually exclusive have never met Xavier Kelly.

A 21-year-old defensive tackle out of Wichita, Kansas, Kelly is just as likely to be found with a drawing pencil in his hand as he is with his hand in the dirt on the line of scrimmage.

“I’ve always been drawing for fun if I just have some downtime or free time,” Kelly said. “If I’m stressed out, I just start drawing.”

Kelly’s artistic passion was evident early, as he could be found drawing at three years of age at the encouragement of his mother, Cheree. But what started as a childhood hobby has grown immensely, just like the 6-foot-4, 300-pound tackle himself. Early in his career, Kelly sought the expertise of Jeff Kallin, who served as Clemson’s Director of Creative Solutions for Design & Digital prior to transitioning into a new role last spring.

“Jeff noticed that I was an artist because he saw some of my artwork because I would design some of my teammates’ tattoos and even design shoes like ones I designed for [safety] Denzel Johnson. Jeff told me to try out this software called Adobe Draw,” Kelly said. “It’s this software I have now where I can get a stylus and draw on my tablet. Say, for example, I was drawing your face. I could zoom all the way into your pupil and work on every little detail. It’s really cool and I actually like it better than just drawing it straight.” 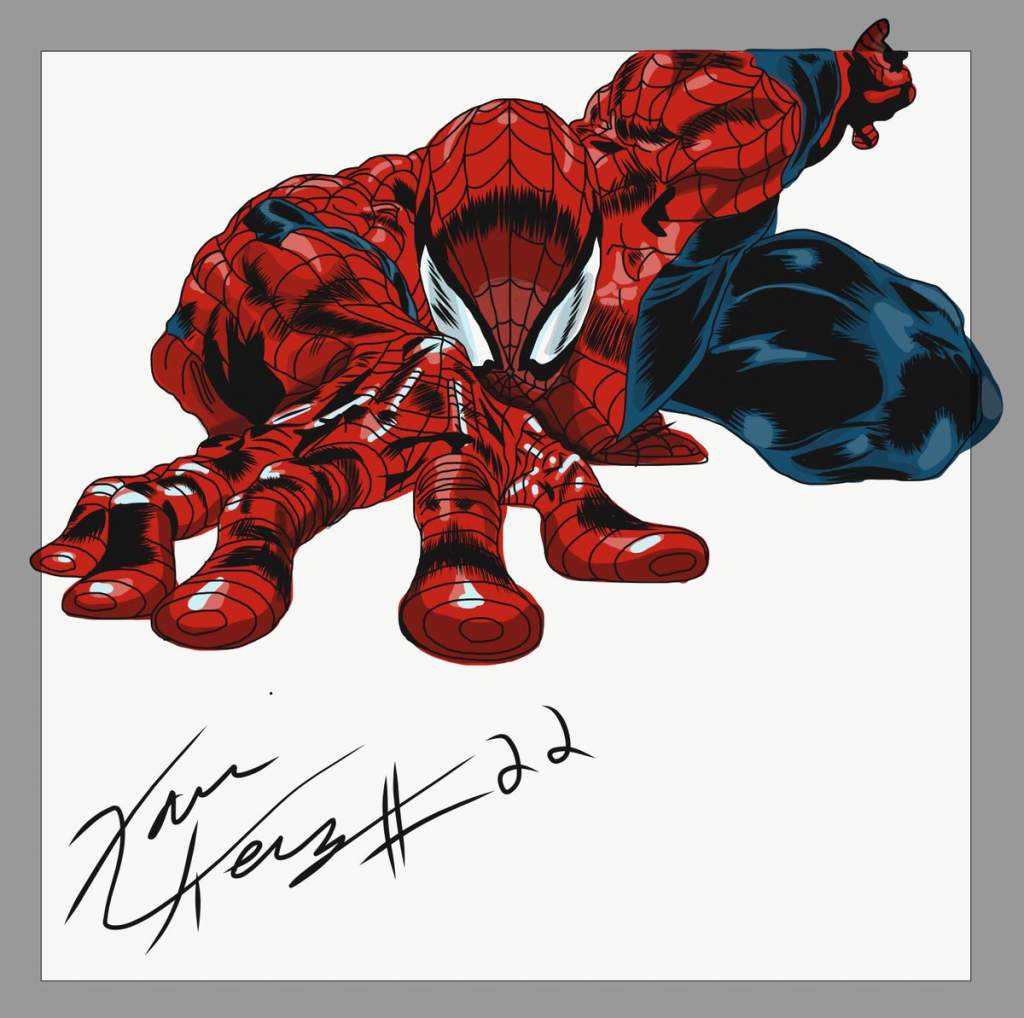 Kallin and Kelly connected in the Creativity Studio at the Nieri Family Student-Athlete Enrichment Center. The two discussed Kelly’s passions and interests, and Kallin showed Kelly software he could access as part of Clemson’s campus-wide partnership with Adobe to help him experiment and explore new avenues for his art.

“I was somebody who was self-taught and was always looking for the right opportunity and the right tool in my hands at the right time,” Kallin said. “To be able to show Xavier some of what’s out there, that’s really what it’s all about being on a college campus — figuring out what people’s passions are, how to address them and give them the tools to help take them there.

“It’s all his talent, all his interest, and kudos to him for reaching out to set that up.”

The meeting opened Kelly’s eyes and eventually opened doors. In May, as part of career development opportunities afforded by Clemson’s P.A.W. Journey program, Kelly traveled to San Jose, California, for a microinternship at Adobe’s world headquarters, located less than nine miles away from Levi’s Stadium, where Kelly and the Tigers had secured the College Football Playoff National Championship four months earlier.

“Man, that was just watching God work right there,” Kelly said of his opportunity to intern for Adobe. “It was really a blessing because it’s something I didn’t have planned, but God works in mysterious ways, so it was a blessing to go all the way to California and go coast-to-coast off the field too.”

Pressed to name his favorite artwork he’s created, Kelly quickly named the one for which he is perhaps best known, though it’s not the notoriety that created his attachment to it. The image shows two Clemson former players in uniform walking amidst clouds to a golden stairwell leading to a pair of awaiting golden hands and emanating rays of light.

The players depicted are former Clemson running backs C.J. Fuller and Tyshon Dye. Fuller passed away unexpectedly from a blood clot last October at the age of 22. Dye died in a drowning accident at the age of 25 in early July. 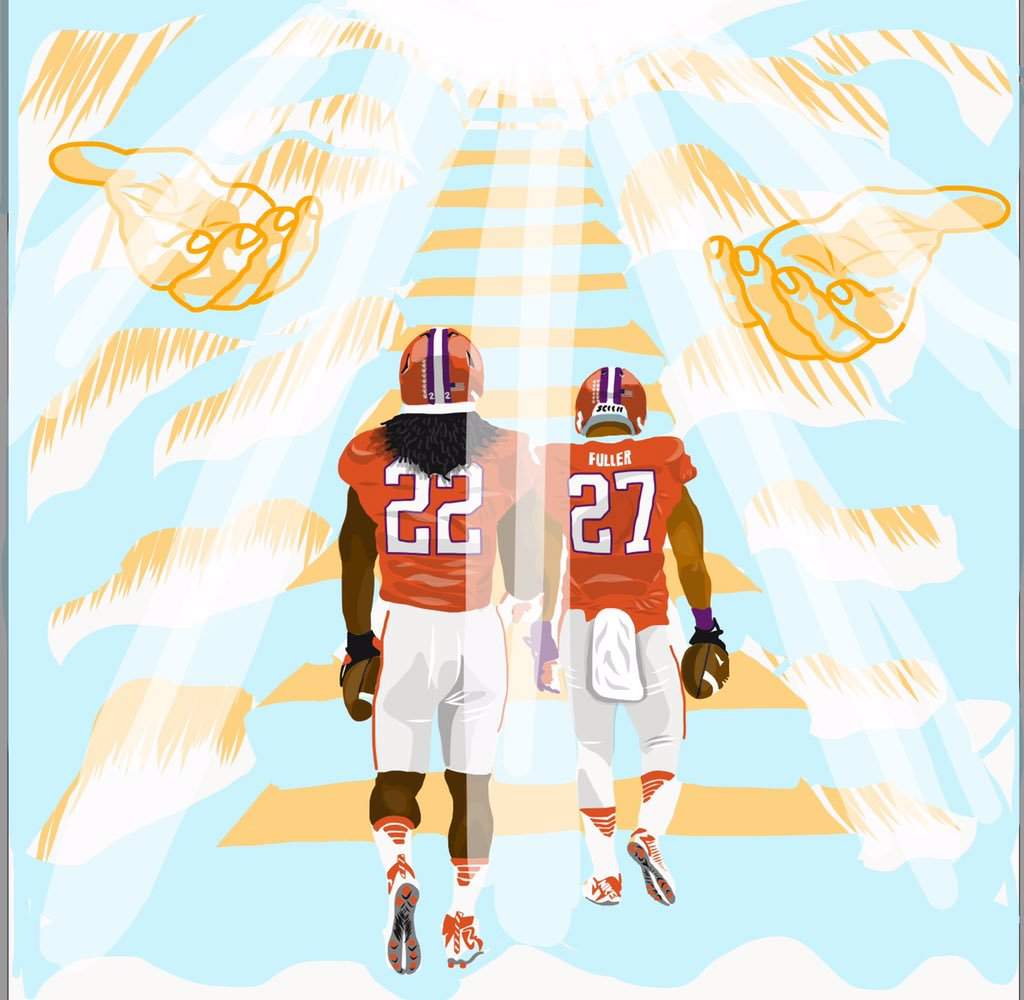 For Kelly, who has always viewed art as a means of catharsis, the image, which quickly spread across news outlets and social media, helped him process the grief of losing two of his former teammates.

“I really got emotional drawing that one because I played with those guys,” Kelly said.

Kelly is still evaluating whether or not to turn his passion into his profession. He has discussed potentially designing logos for companies, tattoos for clients or even creating his own cartoon, but for now, he’s content using his art as an escape.

“It always been my go-to if I’m stressed out or depressed. I’ll just pull out a sheet of paper and a pencil and just start drawing,” Kelly said. “Just focusing on every small detail gets my mind right.”

Kelly’s creative drive is paralleled by his position coach, Defensive Tackles Coach Todd Bates. Bates presented Kelly the initial vision for one of Kelly’s works, a drawing featuring Clemson’s four defensive linemen selected in the 2019 NFL Draft in their new NFL hats along with drawings of Clemson’s two most recent national championship rings. 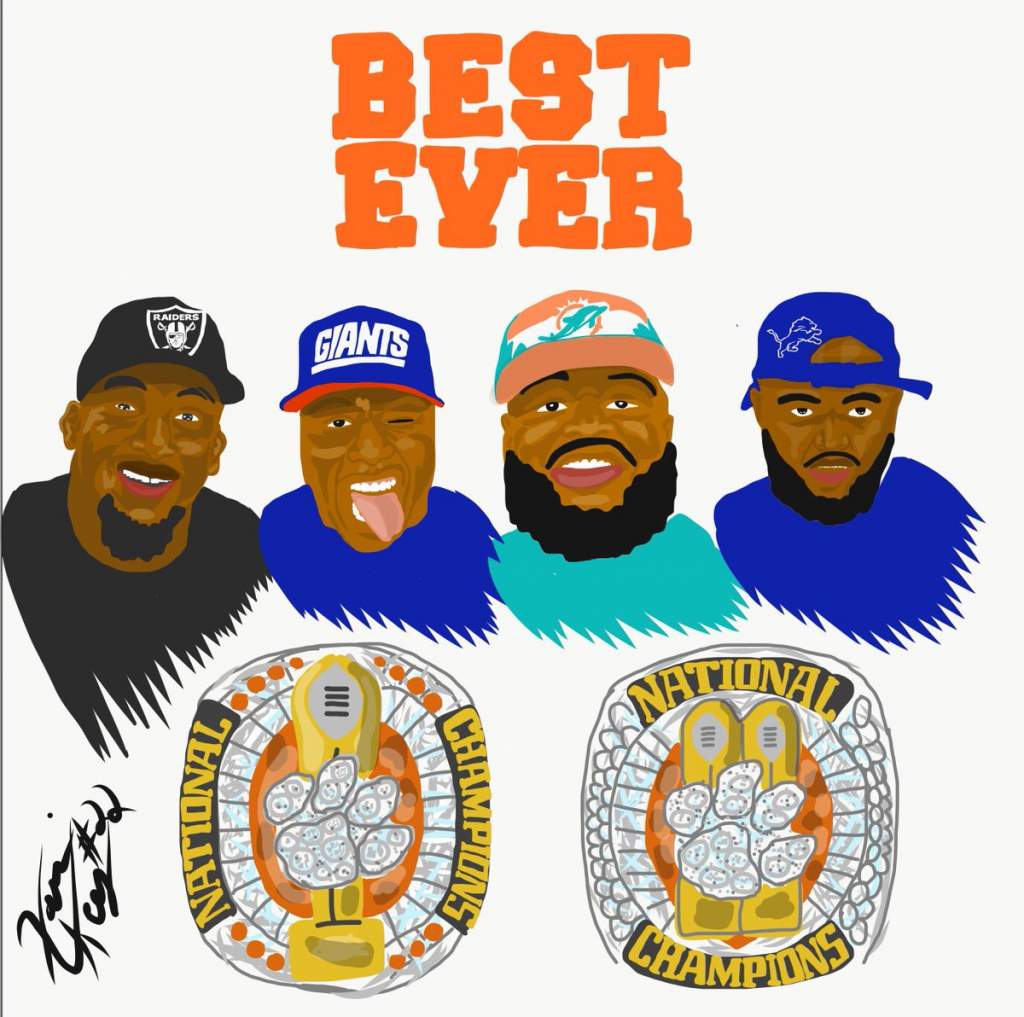 Kelly and Bates are kindred spirits in a sense, as Bates is noted for his artistic passion for creating poetry.

“Whenever I was his age, I didn’t really let a lot of people know my gifts other than being a student-athlete. That’s something that I regret,” Bates said. “Who knows what it could have been? It could have helped so many of my teammates. Only a couple of them knew I wrote poetry. I see somebody like Xavier who has this gift. You’re surrounded by greatness here, and I just want him to tap into something that he can carry long after this game.”

Kelly has indeed tapped into it, and Bates says the resulting change has been evident.

“I’ve seen a spike in his confidence from him putting himself out there and opening up to his teammates,” Bates said. “You rob your teammates of you if you don’t show the whole you, and that’s what I try to encourage him to do.”

The Clemson coaching staff identified an opportunity to best utilize the former four-star recruit by electing to move him inside to defensive tackle. Twelve months later at the start of camp in 2019, Kelly weighed 302 while maintaining the lowest body fat percentage in his position group.

While some programs might stifle outside interests in favor of on-field development, Clemson’s commitment to cultivating young people’s passions and empowering their creative drive has really resonated with Kelly.

“It’s a blessing to be at a program like this,” Kelly said. “Because at Clemson, you’re not just a football player.”