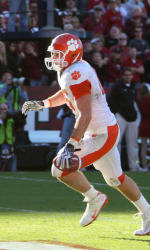 Clemson, SC–C.J. Spiller, Michael Palmer and DeAndre McDaniel all made first-team All-ACC according to voting conducted by the Atlantic Coast Sports Media Association. The association has selected the official All-ACC football team since 1953, the first year of the conference.

He established an NCAA record for kickoff returns for touchdowns in a career with seven. He has scored 16 touchdowns overall in four different ways. He is the only player in the nation to score a touchdown in every game this year. It is the second straight year Spiller has been named first-team All-ACC.

Palmer has 38 receptions for 439 yards and four scores this year. The yardage total is the most ever by a Clemson tight end and the reception total is the second best in school history and just two from the record of 40 set by John McMakin in 1970. Palmer had eight catches for 106 yards against South Carolina last week, the second 100-yard reception game for a Clemson eight end in history. Palmer is the first Clemson tight end to make first-team All-ACC since 1986 when Jim Riggs was chosen.

McDaniel leads the ACC in interceptions this year with eight, and that is tied for second best in the nation. He was named National Defensive Player of the Week by the Walter Camp Foundation in Clemson’s win over eighth ranked Miami earlier this year and he is fourth on the Clemson team in tackles with 78.

Ford is Clemson’s top receiver with 50 for 703 yards and five scores. It is Ford’s first season as an All-ACC football player. He has been a multi-year All-ACC performer in track at Clemson. Ford is second among active ACC players in career all-purpose running and needs just 22 to become the sixth player in Clemson history to reach 4,000 yards.

Two Clemson starting offensive linemen were named to the second team. Thomas Austin was a second-team choice at guard and Chris Hairston was named second-team at tackle. Both were big reasons Clemson ranks in the top 25 in the nation in scoring offense and had a school record streak of six straight games with at least 34 points earlier this year.

Ricky Sapp was named second team defensive end. He has a team best 14 tackles for loss this year, including five sacks. He is fourth in the ACC in tackles for loss and is a big reason Clemson is 12th in the nation in sacks as a team. Sapp has 52 tackles overall to rank seventh on the team.