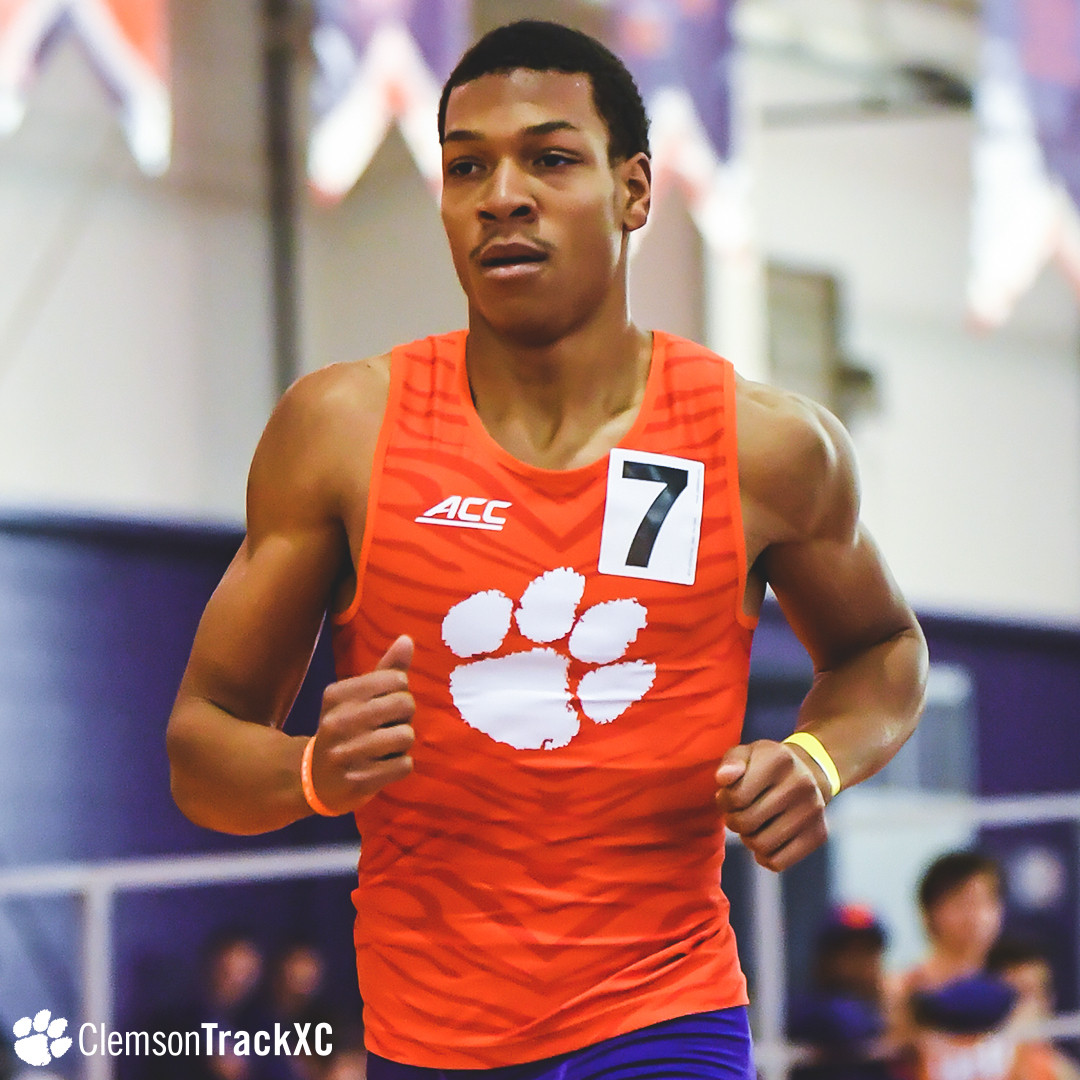 CLEMSON, S.C. – Junior John Lewis shattered the program record in the 1,000m with a time of 2:21.96, besting Terrance Harrington’s 1985 program record of 2:22.42, at the Orange & Purple Classic. Lewis also set a new facility record, which was previously held by Georgia Tech’s Shawn Roberts dating back to 2011.

Senior Jeffrey Green, who set the facility record in the 500m at the Clemson Opener earlier this season, topped his own 600m facility record which he set last year. Green finished in 1:18.07, while pacing senior Nate Gordon and junior Oliver Lloyd to top-five finishes in the event.

Kirk Lewis (7.95) wins his heat and places fourth in prelims to advance to today’s finals in the men’s 60m hurdles. #Clemson🐾🐅 pic.twitter.com/hmE74XNDoB

Chris McBride posted his best mark of 7.50m in the long jump, leaping a distance of 7.58m to, once again, claim the top rank in the ACC.

The men’s mile saw two Tigers earn top-three finishes in Jacob Slann (4:16.99) and James Quattlebaum (4:18.93), who placed second and third among collegiate finishers, respectively. Slann was less than one second shy of his personal record, which he set at the Tiger Paw Invite last season.

In the men’s 300m, Trevious Frazier recorded a personal-best 33.48 to earn a fourth-place finish. Frazier ran the event in 34.08 at the Clemson Opener earlier this season.

On the women’s side, senior Grace Barnett (4:53.66) won the women’s mile with freshman Logan Morris (5:00.84) finishing right behind her for the second straight meet. Finishing in fifth for the Tigers was junior Elizabeth Dawson who finished half of a second shy of her personal record with a time of 2:23.89.

Senior Katie Fortner claimed first-place in the 800m, crossing the finish line in 2:13.73 – nearly five seconds ahead of the second-place finisher. Morris placed third overall for the Tigers in 2:20.05. Dawson, a long-distance runner and member of the Tigers’ cross country team, achieved a personal record in the event with a time of 2:23.89 – good for eighth place.

The Tigers claimed four of the top-six spots in the women’s 60m dash with senior Torie Robinson leading the charge, placing second. Robinson put up a team-best 7.36 and was closely followed by sophomore Rebekah Smith (7.37) in third. Angelica Collins (7.44) placed fifth and Ranee Ricketts (7.47) grabbed sixth.

Olivia James, a senior, was the second collegiate finisher in the 400m. James achieved a time of 55.37, which was good for second among the ACC performance list entering today’s meet.

In the throws department, Grayce French achieved her personal best with longest heave of 12.98m. Her performance earned her a fourth-place finish. The sophomore also did not foul on any of her six throws.

Junior Markeeta Thomas placed fifth in the 60m hurdles with a time of 8.36. Thomas currently holds the top time in the event among all ACC competitors, which she set at the Clemson Opener in 8.35.

Up next, the Tigers travel to Texas A&M for their first road meet of the season, the Ted Nelson Invitational, which is slated for Jan. 12-13.