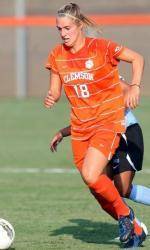 | Marik Staying Positive Even When Ball Doesn’t Find the Net

CLEMSON, SC – The Clemson women’s soccer team defeated The Citadel by a score of 1-0 on Monday night at Historic Riggs Field. Junior Heather Marik scored the game’s lone goal to give the Tigers the victory and improve their record to 2-0 on the season. The Bulldogs open their 2011 campaign at 0-1 with the loss.

Junior defender Heather Marik scored the lone goal of the game in the 18th minute of play. Junior forward Maddy Elder crossed a pass in from the left to Marik, who was waiting at the top of the box to send a 20-yard shot into the top of the net over the head of the Citadel goalkeeper.

The Tigers had several good scoring chances, but were unable to capitalize more than once. Clemson outshot The Citadel 24 to 8 in the contest, and took six corner kicks to the Bulldogs’ three. Sophomore Lauren Arnold posted two saves in goal for the Tigers, while Laura Serafino recorded five stops for The Citadel.

“Another positive is that we did not concede anything to a good Citadel team. At the end of the day, we got the win. Now we will move forward and get ready for the next game.”

The Tigers will return to action on Sunday, August 28 as they travel to Clinton, SC to face Presbyterian College. The game will begin at 2:00 PM at the Blue Hose’s Edens Field at Martin Stadium.