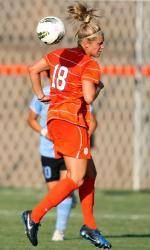 CLEMSON, SC – Sometimes the best lessons in life come when there isn’t much success. Fortunately for the Clemson women’s soccer team Monday night, they needed just one goal to succeed in their 1-0 victory over The Citadel at Historic Riggs Field.

Junior midfielder Heather Marik knocked in what turned out to be the eventual game-winner at the 17:41 mark of the first half. After that, the Tigers drew nothing else despite recording seven shots on goal.

“One of the positives is that we did not concede anything to where all of a sudden it is a 1-1 game, and now the rhythm has changed.”

What Radwanski would like to see is his squad learn from their missed opportunities, especially when Marik and freshman Liska Dobberstein missed so many close shots on goal. Overall, the Tigers had 24 shots, with 15 coming in the first half.

“Going forward, we have to put those opportunities in because in the ACC we are not going to get that many chances. We have to work on getting those few chances we do have and put them away.”

So how will the Tigers learn from those missed opportunities?

“You just have to keep plugging (along), and keep telling yourself that you will get the next one and the next one,” Marik said. “You have to make sure you are putting those away in practice because that is going to translate to the game.

“Don’t get down on yourself and keep plugging away at it.”

Radwanski would like to see Marik, one of seven upper classmen on this year’s team, step up more vocally and hammer away those points to her teammates. He also said that he and the rest of the coaching staff need to pick it up if the players are not doing it.

“That’s what the captain is supposed to do, but that might be a little bit of my job to step up as well because that was my personality when I played,” Radwanski said. “If the players are not going to do it we will have to do it.

“We are encouraging players like Heather, players like Maddy (Elder) and players like Sarah Jacobs, `Can you be that voice when we are not around.’ It can be a contagious one. You want the positive domino effect to happen.”

Being a midfielder, Marik says it is her job to keep the team going and keep its spirit up even when the ball isn’t finding the back of the net.

“I needed to keep us going and keep the team going,” she said. “When someone does miss, be like `Hey it is okay you will get the next one.’ I think I need to bring that out of myself a little more, and I think that can only help the team.”

The good news, the one shot Marik did get into the net was the only one that mattered on this night, and more importantly it improved Clemson’s record to 2-0.

“It feels good after working so hard for three weeks to finally get the reward from it,” she said. “It was good to put them away, and now we will keep working hard and we will go from here.”

The Tigers will go to Presbyterian College on Sunday for a 2 p.m. match in Clinton.