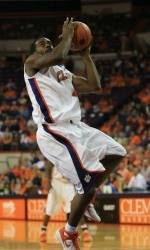 Rivers , who was also 4-for-8 from beyond the arc, completed a double-double by grabbing 11 rebounds. Trevor Booker scored 18, had eight rebounds and tallied four blocks for the Tigers (9-0). Terrence Oglesby chipped in with 12 points for Clemson, who rallied from a seven-point halftime deficit for the victory.