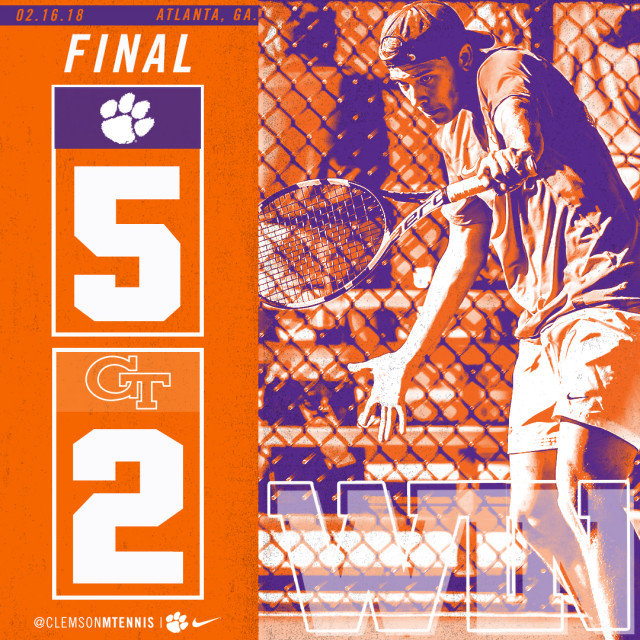 Clemson took care of business in doubles with victories on courts one and three to clinch the doubles point. The French duo of Alex Favrot and Simon Baudry were the first to finish (6-3) followed by Carlos Kelaidis and Marshall Dagostine (6-2).

Kelaidis took an early lead at No. 5, winning the first set 6-4 over Chris Yun. The Glyfada, Greece native clinched a Tigers victory after winning the tiebreak 7-6 (7-5) in the second set.

– Clemson is on a five-match winning streak.

– Favrot defeated his second ranked opponent of the spring.

– The Tigers are 5-0 against team who saw action in the NCAA Tournament last season, defeating Presbyterian, Army, Cornell and Georgia State, Georgia Tech.

The Tigers will return to action Friday, Mar. 2 as they host No. 17 Florida State in the ACC home opener at AU Tennis Center. The match is set for a 5 p.m. start.

“We challenged the guys this week to go out as a team and compete like champions from the first point to the last point. This was the next step needed in establishing ourselves as a team. I am so proud of the guys because that is what they did today in Atlanta. We had #3 doubles step up to clinch the doubles and then all of our guys fought hard in singles. There is a certain way to compete and play this game, and we took a step forward as a team doing this. These guys love each other and when they compete, it is on display. They love to fight hard for Clemson. Coach Young, Sprenglemeyer and I are loving working with this group.”