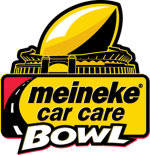 CLEMSON, SC – Clemson will face South Florida in the ninth-annual Meineke Car Care Bowl in Charlotte, NC on December 31 at 12:00 PM, announced Sunday. The game will be played at Bank of America Stadium, the home of the NFL’s Carolina Panthers, and will be televised live by ESPN. To order bowl tickets, call 1-800-CLEMSON (starting Monday morning) or log onto ClemsonTigers.com.

Clemson and South Florida have never met on the gridiron. The Tigers have also never played in the Meineke Car Care Bowl.

Clemson leads the ACC and is ninth in the country in scoring defense (17.8) and has allowed just eight touchdowns by the opponents’ offenses in the past seven games. The Tigers are also third in the ACC and 23rd in the nation in total defense (323.8)

“We are excited about playing South Florida in Charlotte in the Meineke Car Care Bowl,” said Head Coach Dabo Swinney. “It’s a great situation for our fans. One of the main reasons we were selected for this bowl is because of our great fan support and the passion of our fans.

“We’ve never played in the Meineke Car Care Bowl, so we look forward to representing our school and conference during the bowl week and on gameday. We haven’t won bowl games in back-to-back seasons since 1989-90, so hopefully we can accomplish that feat and end the season on a positive note.

“South Florida presents us with an outstanding matchup. Skip Holtz has done a great job in his first year as head coach of the Bulls. They beat Miami (FL), who beat us, so it will be a great matchup and we look forward to playing South Florida in the bowl game.”

South Florida has a 7-5 overall record and 3-4 Big East mark. Each of the last six Bull games have been decided by eight points or less, including a 23-20 win at Miami on November 27 and a 19-16 setback against Connecticut on December 4.

Mo Plancher leads the team with 743 rushing yards, while Demetris Murray has added 517 rushing yards. B.J. Daniels has thrown for a team-high 1,496 yards and nine touchdowns against 12 interceptions, however, Bobby Eveld started against Connecticut and has passed for 454 yards and two scores on 42-75 passing. Dontavia Bogan has a team-high 46 catches for 670 yards and five touchdowns. Seven of the 11 offensive starters on South Florida’s depth chart entering the Connecticut game were seniors. Thirteen different players have contributed to the team’s 28 sacks. Jacquian Williams has 68 tackles and 9.5 tackles for loss, both team-highs.

“We are delighted for the opportunity to play in the Meineke Car Care Bowl against South Florida,” said Athletic Director Dr. Terry Don Phillips. “The great support our fans have shown through communication to the Meineke Car Care Bowl was very convincing and we appreciate the outstanding support of our fans. That strong support was significant in its decision. It is great exposure to play on New Year’s Eve and we are looking forward to playing a good, solid team in South Florida, who narrowly lost to Big East Champion Connecticut on Saturday.”

The Tigers are led by junior defensive end Da’Quan Bowers, the Scout.com National Defensive Player-of-the-Year, a first-team All-American, and the ACC Defensive Player-of-the-Year in 2010. The finalist for the Bednarik Award, Hendricks Award, Lombardi Award, and Nagurski Award leads the nation in sacks (15.5) and is second in tackles for loss (24). He is also second on the team in tackles (67).

Bowers, a First-Team All-ACC selection, is joined on the all-conference first-team by senior defensive tackle Jarvis Jenkins and senior safety DeAndre McDaniel. Jenkins has 51 tackles and nine tackles for loss, while McDaniel has 73 tackles and four interceptions, both team-highs. McDaniel also has 15 career interceptions, tied for second-most in school history.

Offensively, junior Jamie Harper has 726 yards on 177 carries and 31 catches for 308 yards. Sophomore Chris Hairston, who was a First-Team All-ACC selection.

Sophomore Kyle Parker has passed for 2,079 yards and 12 touchdowns while completing 57.1 percent of his passes. His favorite target has been freshman wideout DeAndre Hopkins, who has 43 catches for 532 yards and four touchdowns, all team-highs. His 43 catches are the most by a Tiger first-year freshman in history. Sophomore tight end Dwayne Allen, a Second-Team All-ACC pick, has added 31 receptions for 356 yards.

“It is a great opportunity to play in a bowl game like the Meineke Car Care Bowl and against a successful team from the Big East,” said Harper. “Being from Florida, it is always fun to play a Florida school. But most of all, I am looking forward to spending another month with my teammates representing Clemson. Our goal is to send our seniors out with a win.”

“Going to a bowl game is a great honor,” stated graduate quarterback and safety Michael Wade. “Charlotte is a great town and it will be great to play so close to home. It is really exciting to play against such a great team like South Florida on New Year’s Eve and to spend another month with my teammates.”

“It is a privilege to play in a bowl game in my home state of North Carolina,” added junior offensive tackle Landon Walker. “South Florida is a very good team with many big wins this season. I look forward to working to end this season on a positive note, for not only our seniors, but the future of the program.”