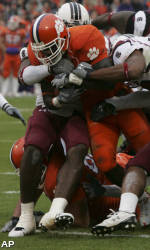 Clemson Runs All Over South Carolina 31-14

CLEMSON, S.C. (AP) — James Davis ran for three touchdowns to lift Clemson to a 31-14 victory over South Carolina on Saturday, the Tigers’ sixth win in the past seven games against its state rival.

Now, the Tigers (7-5) get to keep playing after qualifying for the postseason — and maybe interim coach Dabo Swinney gets to hold on to the job a little longer.

Swinney took over on Oct. 13 when Tommy Bowden walked away with the Tigers’ expected Atlantic Coast Conference title season in shambles.

Almost from the start, Swinney made every right move. None, though, was bigger than letting Clemson’s best playmakers make the plays. That showed against South Carolina (7-5).

Davis powered his way to his 47th, 48th and 49th career touchdowns, one away from the school record.

C.J. Spiller had a dazzling 39-yard burst to set up Davis’ first score.

In the second quarter, quarterback Cullen Harper was falling to his knees about to be sacked when he threw an on-target pass to Jacoby Ford for a 50-yard touchdown.

And don’t forget Clemson’s defense, which rattled passer Chris Smelley into four interceptions and outshone a South Carolina unit that had led the Southeastern Conference much of the year.

When Smelley threw his fourth interception with 4:25 to go, all Gamecocks coach Steve Spurrier could do was stare onto the field.

It was two years ago after South Carolina’s 31-28 victory here Spurrier said it was the kind of win he could build on. Instead, he fell to 1-3 against his state rivals.

Clemson fans celebrated and chanted “Da-Bo!” and “Da-Bo Swin-ney!” as the clock wound down on the 10th victory over their rivals in the past 12 seasons.

Clemson may have made Phillips’ decision a no-brainer. The Tigers have won three straight and four of five to reach the postseason, a feat that looked impossible when they stood 3-4 last month with only one victory over a BCS conference team.

For the Gamecocks, it was the second straight disappointing defeat — following a 56-6 loss at Florida.

It didn’t start that way as South Carolina’s defense got going fast, Chris Culliver jarring the ball free from Spiller less than three minutes in.

That’s when Smelley’s problems began. He was picked off by Chris Chancellor, the first of his three interceptions — all which led to Tiger touchdowns.

Spiller’s juking, 39-yard run took it to South Carolina’s 1 — he got past three of the Gamecocks’ best tacklers in linebacker Eric Norwood, safety Emanuel Cook and cornerback Captain Munnerlyn — before Davis finished off the scoring drive.

A blocked punt, the third Clemson’s had against South Carolina the past two games, set up a 22-yard field goal by Mark Buchholz.

Cullen Harper made the Gamecocks pay with his long touchdown pass to Ford.

Harper, on his knees, pumped his fists and Swinney leaped into the arms of former Gamecocks coach and current Clemson offensive line coach Brad Scott for a bear hug.

It wasn’t long before Smelley’s next mistake and Clemson’s next touchdown.

Safety Michael Hamlin stepped in front of Smelley’s throw on the following drive as Spurrier stood with arms folded.

It took only three plays for the Tigers to capitalize, Davis rushing around the left side for a 20-yard TD.

South Carolina closed things to 24-14 on touchdown receptions of 16 yards to Patrick DiMarco and 23-yards to Weslye Saunders.