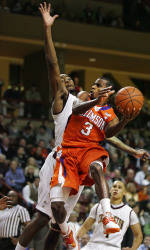 CHARLESTON, S.C. (AP) – Jerai Grant scored 15 points and made all nine of his free throws to lead Clemson to a 66-59 win over College of Charleston on Wednesday night.

Demontez Stitt returned for the Tigers (8-4) after missing two games with knee surgery. He scored eight points, including a key 6-foot baseline floater that put Clemson ahead 62-57 with 42 seconds to go.

College of Charleston’s Andrew Goudelock led all scorers with 21 points, fighting through double-teams much of the game. But he missed a 3-pointer that could have tied the game with 16 seconds to go.

Every year since opening its new arena, College of Charleston (8-4) has notched a signature win in the cozy 5,100-seat gym. In 2008, the Cougars beat South Carolina, and in 2009, they knocked off North Carolina.

But they couldn’t pull it off Wednesday night as the Tigers won their third in a row.