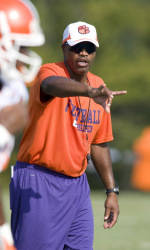 This year in Death Valley, Clemson fans may notice a few unfamiliar faces on the Tiger coaching staff. Co-Defensive Coordinator Charlie Harbison, however, should not be one of them. Though he had not been a part of the Clemson staff for the previous 12 years, he is not new to Tigertown. He served his first stint here more than a decade ago from 1995-97 and coached the secondary then as well. He is excited to be back.

“It’s the people that make the place,” said Harbison. “Clemson is home and family. I’ve been here before, and I’m blessed that the Clemson family and the fans have opened their home back up to me again.”

Harbison describes Swinney as approachable, someone whose door is always open. “He has passion. He’s touchable. What you see, that’s who he is. He’s so genuine and he wants the best for the kids…not only for the kids, but Clemson, period, as his family.”

As the defensive backs coach, Harbison admits to loving the difficulty of the position (he played four years as a defensive back at Gardner-Webb as well as with the Buffalo Bills and in the USFL).

“My favorite thing about the DB position is the challenge,” explained Harbison. “You’re playing on an island and it’s you against the receiver. Who knows where he’s going. You have to react and play.”

Harbison, whose nickname is “Cheese” because of his familiar smile and happy nature, began his coaching career in 1984 at his alma mater (Gardner-Webb). He had a few stints coaching minor-league football in North Carolina before moving into the college ranks at Texas-El Paso for one season (1994).

From 1995 to 2008, Harbison was an assistant coach at Clemson, Alabama, Louisiana State, Alabama (for the second time), and Mississippi State, and now he has returned to Tigertown. In all, “Cheese” has spent 18 years as a full-time college coach with 10 winning seasons and 11 bowl games.

Some of his favorite coaching moments to date came during his tenure in the SEC. “One of the best moments was when we won the Sugar Bowl at LSU. We won the SEC in 2000 and the Sugar Bowl in 2002. But if I had to pick two moments, it would be when we (Coach Swinney and I) won the SEC at Alabama in 1999. We beat Steve Spurrier and the Florida team in the SEC Championship game.”

A former Tiger and player under Harbison was Clemson great Brian Dawkins, who, for good reason, is Harbison’s most memorable player.

“He’s very focused,” stated Harbison. “He doesn’t let anyone get in his way as far as getting better. He is a team player, yet he can stay focused on the task at hand. He was a pro before he became a pro. He played like a pro when he was here. And that’s one thing I try to tell so many young players…in order to be a pro, you have to be a pro while you’re in college, on the field, off the field, and in the classroom.”

Dawkins was a second-team All-America safety, First-Team All-ACC selection, and tied the Clemson record for interceptions when he picked off three passes in one quarter against Duke in 1995. He was selected in the 1996 NFL draft by the Philadelphia Eagles in the second round. Dawkins’ 13-year stint with the Eagles made him one of the most recognized safeties in the NFL. This year is his first season with the Denver Broncos, and he has helped that team to a 6-0 start.

Harbison might have just as many future NFL players on his 2009 roster of defensive backs. This year’s group features senior cornerbacks Crezdon Butler and Chris Chancellor, both preseason Thorpe Award candidates, along with junior safety DeAndre McDaniel. Clemson is the only school in the nation with both its starting cornerbacks on the list. The trio has combined for 29 career interceptions at Clemson and all three are among the top 19 active players in the nation in terms of career picks. McDaniel has also totaled seven interceptions in 2009 and is tied for the national lead in that category.

“We’ve had a lot of improvement from our group,” said Harbison. “There is lots of talent. A lot of people want me to pick out one or two guys, but we’re a unit. You can’t play defensive back with two guys. You might shift the weight on more than one person, but I don’t look at it like that. We’re a family. Whatever defense is called, everyone has a piece of that puzzle. They have to make their piece fit.”

Though he has been absent from Tigertown for some time now, Harbison’s piece of the puzzle is back where it belongs, and the secondary coach is more than ready to take on the challenges that come his way.