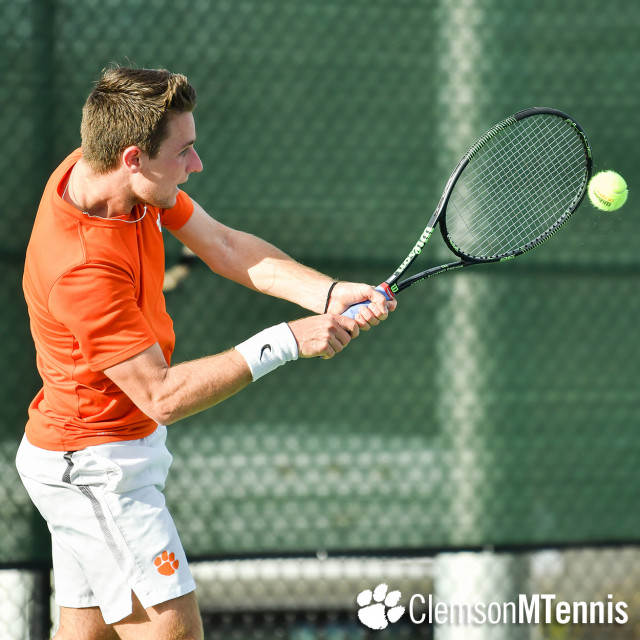 GREENVILLE, S.C. – The Clemson men’s tennis team won the doubles point and Simon Baudry picked up an exciting come-from-behind win at No. 2 singles, but solid singles play helped Virginia to a 4-2 win on Sunday afternoon at the Mickel Tennis Center on Furman’s campus in Greenville, S.C. With the loss, the Tigers dropped to 7-5 (2-3 ACC), while the Cavaliers improved to 11-5 (4-1 ACC).

The Tigers won the doubles point in thrilling fashion. After Virginia claimed a 6-2 win at No. 1, Clemson’s Sam Edwards and Yizhou Liu forced a tiebreak at No. 2, winning 7-6(4). With the win, Edwards and Liu improved to 7-3 on the season, and 6-2 at No. 2 doubles. With the doubles point on the line on Court 3, Marshall Dagostine and Carlos Kelaidisfought back from trailing 3-5 to tie the score at 6-6 and force a tiebreak, which they won 7-2.

The Cavaliers started out strong in singles play, winning in straight sets on Courts 1 and 4. At No. 3 singles, the Tigers’ Edwards faced Aswin Lizen, the 32nd-ranked singles player in the nation and the highest-ranked singles player in the Virginia lineup, and played a hard-fought match, which he ultimately lost, 6-4, 6-4. Simon Baudry gave Clemson its second point of the match with a come-from-behind win at No. 2 singles, 2-6, 6-4, 7-5, over 120th-ranked Gianni Ross of UVa. Kyrylo Tsygura clinched the team victory for the Cavaliers with a win at No. 6 singles. Liu led 6-4, 4-3 in his No. 5 singles match when play was abandoned.

Clemson has two more home matches this coming week, starting with a Thursday, March 29 contest against Boston College. The match between the Tigers and Eagles is set to begin at 5 p.m. at the AU Tennis Center in Anderson, S.C.

Head Coach John Boetsch Quotes:
“It was a hard-fought match that came down to the wire. We got back on track in doubles, which was nice. Simon (Baudry) led the way for us in singles, showing what Clemson tennis is all about. He was an example to our guys on how Clemson Tigers compete and what we stand for.”