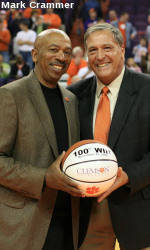 The win moved Clemson to 6-0 on the season, while Savannah State suffered its first loss of the year and fell to 4-1. The Tigers shot over 50 percent from the field and blocked 14 shots and had 13 steals defensively.

Clemson jumped out to a 9-2 lead after K.C. Rivers knocked down a wing three. The Tigers extended the lead to 15-5 less than five minutes into the game after Jerai Grant followed his own miss.

After Savannah State pulled to within five at 18-13, Clemson put together an 11-0 run that highlighted the first half of play. Oglesby hit a three from the top of the key and Booker followed with a pair of shots inside the paint to make it 29-13 in favor of Clemson. The Tigers led 41-19 at the break.

Savannah State began the second half on a 17-3 run of its own. Purnell called a timeout with 14:38 remaining, and from there it was all Clemson. With the score 50-40, Clemson had an 8-0 run that ended with another three by Rivers. Later in the half, Clemson reeled off 14 consecutive points to put the game out of reach. The Tigers scored 12 of the 14 points during the run inside the paint.

Catalin Baciu, better known as ‘Bobo’, played his first game after sitting out a five-game suspension for playing professionally prior to being recruited by the Tigers. He had four points and two blocks in his debut. Raymond Sykes was the third Tiger to finish in double figures, posting 14 points on 7-9 shooting. Six different players had at least one blocked shot, led by Booker with four. The Whitmire, SC native also had four steals, best on the team.