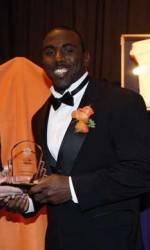 CLEMSON, SC – Clemson Head Coach Dabo Swinney announced award winners for the 2009 football season at the team’s awards banquet on Saturday evening. The Tigers concluded the season with a 9-5 record, Atlantic Division Champions of the Atlantic Coast Conference, and as the #24 ranked team in the nation by Associated Press.

Spiller was named the Most Valuable Player of the Atlantic Coast Conference, the first Clemson player to win that award since 1986. He was a first-team All-American by every service. He was the only player in the nation to score at least one touchdown in every one of his team’s games and he ranked fourth in the nation in all-purpose running (2588 yards) and fifth in total touchdowns with 21.

DeAndre McDaniel was named the MVP of the defense. McDaniel was a first-team All-American according to the Football Writers Association and a first-team All-ACC selection. He had eight interceptions to tie a Clemson record, and finished fourth on the team in tackles with 102. He became the first player in Clemson history with eight interceptions and at least 100 tackles in the same year.

Hustle Award — Player who gave consistent effort throughout the year and served as an inspiration to his teammates: Terrance Ashe

12th Man Award — Contributed the most off the bench: Jamie Harper and Andre Ellington

Rookie of the Year Kyle Parker and Dalton Freeman

Rookie of the Year AwardMalliciah Goodman and Rashard Hall

Specialist of the Year Michael Wade