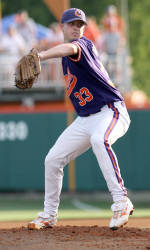 Behind 20 hits along with a six-run first inning and a nine-run sixth inning, #13 Clemson defeated #16 Alabama 19-5 in front of 6,024 fans at Doug Kingsmore Stadium in the Clemson Super Regional on Sunday night. The Tigers, who evened the series 1-1, improved to 42-23. The Crimson Tide dropped to 42-24.

The Tigers jumped all over the Crimson Tide with six runs in the first inning and never looked back. In all, the Tigers totaled 20 hits and were 10-for-18 with runners in scoring position. Alabama scored in five of the nine innings, but it could only muster one run in each of those five frames.

Adam Morgan (7-5), the first of six Crimson Tide hurlers, suffered the loss, as he gave up seven hits, eight runs, and two walks in 2.1 innings pitched.

Mike Freeman flared a one-out single to left field in the first inning to extend his hitting streak to 13 games. Jeff Schaus followed with an infield single and Kyle Parker laced a single through the left side to score Freeman. Brad Miller walked after being down in the count 0-2 to load the bases, then John Hinson singled up the middle to score Schaus and Parker. Wilson Boyd drew a two-out walk on five pitches, Spencer Kieboom belted a double to left-center to score Hinson and Boyd, giving Clemson a 6-0 lead. Clemson’s six-run first inning was its highest total in the opening frame of an NCAA Tournament game since June 5, 1959. On that day in Gastonia, NC, Clemson scored six runs in the first inning against Florida State.

Jake Smith led off the second inning with a long solo homer to left field on a 1-2 pitch, his second home run of the super regional and 15th of the season.

Hinson answered with a solo homer on an 0-2 pitch in the top of the third inning, his 16th long ball of the year. Shaffer blasted the next pitch high off the scoreboard in left-center for a solo homer, his fifth home run of the season, to up the Tigers’ lead to 8-1.

In the bottom of third inning, the Crimson Tide cut into Clemson’s lead thanks in part to a Tiger error. Brock Bennett led off with a single up the middle but was erased on Taylor Dugas’ fielder’s choice. Josh Rutledge followed with a potential inning-ending, double-play grounder, but Hinson booted the ball and both runners were safe. After Ross Wilson’s single through the left side loaded the bases, Dugas scored on Clay Jones’ groundout to third. The Tigers stayed ahead 8-2 when Smith popped up with runners on second and third to end the frame.

In the top of the fourth inning, Freeman lined an 0-2 pitch to left-center for a one-out double and scored on Schaus’ line-drive single to center. Parker and Miller followed with singles through the left side to load the bases, as Miller’s came on an 0-2 pitch and extended his hitting streak to 16 games. But the next two Tigers were retired to keep Alabama within seven runs.

The Crimson Tide put together a two-out rally in the bottom of the fourth inning. Brett Booth lined an 0-2 pitch to left-center for a two-out single and Bennett followed with a single up the middle. Dugas then laced a single through the left side to score Booth.

Boyd led off the fifth inning with a single up the middle and advanced to second two batters later on Will Lamb’s groundout. Freeman then came through with a two-out double down the left-field line to plate Boyd.

The Tigers added nine runs to their lead in the top of the sixth inning. Parker led off with a walk on five pitches and moved to second on a passed ball. Miller singled through the left side as Parker advanced to third and Hinson walked to load the bases with no outs. Shaffer lined a single to left field to score Parker and Miller, then Boyd walked to load the bases. Kieboom followed with another walk to score Hinson. After the next two Tigers struck out, Schaus lined a two-out single to right field to plate Shaffer and Boyd. After Parker loaded the bases with a walk, Miller hit an opposite-field grand slam to left field, his second grand slam of the season and eighth long ball overall. It was also Clemson’s ninth grand slam of 2010 and extended the Tigers’ lead to 19-3.

Wilson blasted a solo homer to left-center in the seventh inning, his ninth long ball of the season.

Six different Tigers totaled at least two hits and seven different Tigers scored at least two runs. Miller went 4-for-5 with a grand slam, three runs, and a walk, while Schaus went 4-for-6 with three RBIs and two runs. Shaffer also went 2-for-5 with a homer and four RBIs and Kieboom tallied a career-high three RBIs. Freeman added three hits as well.

Smith and Wilson both hit solo homers for Alabama, who had 10 hits in the game. Wilson, Booth, and Bennett had two hits apiece as well.

The two teams will square off for a decisive game-three of the Clemson Super Regional on Monday at 1:00 PM. The game will be televised live by ESPN2. Clemson will be the designated visiting team and occupy the third-base dugout.