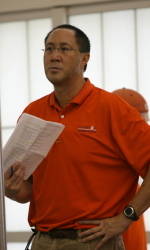 CLEMSON – Head Swimming and Diving Coach Christopher Ip announced the hiring of Zac Adams as an assistant coach on Friday. He will assist the Tigers’ staff in middle-distance freestyle, butterfly, and individual medley.

“I am excited to introduce Zac Adams as the newest member of Swimming and Diving coaching staff,” Ip said. “Zac has a strong background in USA club swimming. Over the past few years I observed him take over and elevate the Anderson Swim Team to a prominent club in South Carolina.

“He has held positions in USA and South Carolina Swimming, coached multiple All Star teams, and Elite Developmental Programs for USA Swimming. Prior to having him join our staff, I jumped at the opportunity to have Zac work with me in an internship through the United States Sport Academy. What I found was an unbelievably dedicated and administratively organized communicator. Along with his strength to coach many levels of competitiveness, Zac is going to develop into a great recruiter with his ties to USA club swimming.”

A native of Norcross, GA, Adams swam collegiately at Louisiana State University and lettered three times from 1998-2000. In 2003, after a brief stint in the business world, he joined the staff at Bengal Tiger Aquatic Club as a senior assistant, beginning a stretch of eight years working with various club teams.

From 2004-08, Adams spent time with the New Wave Swim Team in Raleigh, NC. After that, he spent a short period of time coaching at Gwinnett Aquatics. Later in 2008, Adams was named head coach at the Anderson (SC) Swim Club, a position that he held until accepting the job at Clemson.

Everywhere Adams worked, both as an assistant and a head coach, the programs grew in quality and quantity. Adams has a history of coaching numerous athletes that have qualified at junior nationals and set records at their local pools, a quality that made him attractive to Ip.

“Being here right now is not the end of the dream, but the dream is beginning to finally come true,” Adams said. “If you look at the assistants who have worked under Coach Ip and what they have gone on to do, that makes this that much better for me.”