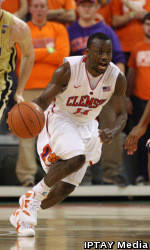 CLEMSON, SC – All Andre Young needed to end his three-game shooting slump was a power outage – a power outage at Littlejohn Coliseum to be more specific. But after a power surge on the Clemson campus turned off the lights at the 5:56 mark in the first half Saturday, Young’s shooting was turned on.

After a 23-minute delay, Young came out red hot, as he scored 15 straight points for the Tigers on his way to career-high 29 points and a personal best seven three-pointers as Clemson beat Georgia Tech 64-62.

“The power went out, but my power cut on,” Young said. “I don’t know what it was, but it was just going in.”

Leading 13-10 when the two teams came back on the floor, Young first hit a three-pointer from the left wing and then following a steal from Tanner Smith he drained his second from the top of the key. The 5-foot-9 point guard continued his onslaught with a third trifecta from the right wing on a pass from Smith, and then drove the lane and finished a three-point play that gave Clemson a 25-13 lead with 2:35 to play in the first half.

Young scored Clemson’s 15th straight point with another three thanks to a nice kick-out pass from Smith. That basket upped the lead to 28-15 with 1:59 to go.

“I don’t know what it was,” Clemson Head Coach Brad Brownell said. “I certainly thought he would have more games like this, maybe not 29 points, but games like today where he really shot it well from three. He had been fighting it a little bit, and as you can see, we needed it. We still had just 64 (points), and he had 29 of them.

“It was a great night for him.”

It was a night in which Young hit seven of nine three-pointers and connected on nine of 12 shots overall. He was also 4-for-5 from the foul line. The seven threes also marked a career high.

“I guess it was just my night,” the senior said. “I was due for a good shooting night. I have been in a little slump. Once I hit a couple of them, my teammates kept finding me. They were really looking for me and they kept encouraging me to shoot the ball.”

Prior to Saturday, Young was having a hard time finding his shot. In Clemson’s three straight losses coming into the Georgia Tech game, Young was only 6-of-21 from behind the arc and had made just 13 of his last 40 shots overall.

“You have to keep shooting. You have to maintain your confidence and realize you are a good shooter, and just try not to let a couple of bad shooting nights get you down,” Young said.

It was only fitting that Young’s slump ended on the same afternoon the Tigers ended a three-game skid. And fittingly enough, he made the final two free throws to seal the victory after Georgia Tech erased a 16-point lead with a mad rally late in the game.

“That slump was really frustrating. I definitely feel responsible for some of that,” Young said. “I felt like I could have helped the team, but at the same time it is really great to see our team grind out a tough game that came down to one possession. We gave up a lot of these one possession and two possession games, so it feels good that we finally got one.”

In addition to Young’s 29 points, the Tigers got nine points and six rebounds from Devin Booker, while Smith had five assists. Georgia Tech was led by Glen Rice’s 19 points, 17 of which came in the second half.

Clemson will take the next week off before playing host to Wake Forest for a 12:00 PM tip on Saturday, Jan. 28.