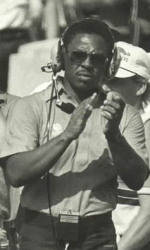 Clemson, SC – Former Clemson assistant coach Woody McCorvey has returned to Clemson to work on Dabo Swinney’s staff. McCorvey, who was a full-time assistant at Clemson between 1983-89, will serve as an administrator within the Tiger football program. McCorvey was an assistant coach at Alabama when Swinney was a football player with the Crimson Tide. In fact he was Swinney’s position coach.

“Woody is going to be a great asset to our staff,” said Swinney. “He is going to be my national security advisor. My experience with Woody McCorvey dates to my days as a player at Alabama when he was my position coach. Woody coached at Clemson in the 1980s under Coach Ford and knows all about this school’s winning tradition. He has been a part of 11 conference championship teams in his impressive career.”

McCorvey, 58, worked seven years at Clemson University (1983-89). With McCorvey coaching the tight ends from 1983-85 and the wide receivers from 1986-89, Clemson posted a 60-19-3 overall record and won three ACC Championships. During that time frame, the Tigers were invited to the 1985 Independence Bowl, the 1986 and `89 Gator Bowls, as well as the 1988 and `89 Florida Citrus Bowls. Clemson posted a 10-2 record in each of his last three seasons under head coach Danny Ford.

McCorvey has coached at the Division I level for the last 26 years and has been to a bowl game 17 of those years. He has coached or signed 36 players who have gone on to professional football. Since he left Clemson in 1990, he has coached in the SEC every year, including each of the last five at Mississippi State where he served as offensive coordinator and assistant head coach in addition to coaching the quarterbacks. He was a big reason Mississippi State won eight games, including wins over Auburn, Alabama and Mississippi in 2007.

Under McCorvey’s leadership, Tennessee maintained the school’s reputation of having an outstanding rushing attack. The Volunteers led the Southeastern Conference in rushing in 1999, averaging 191.3 yards per game. McCorvey’s work helped tailback Travis Stephens pace the SEC in rushing in 2001 with 1,464 yards. One year prior, McCorvey helped tailback Travis Henry finish second in the league and 14th nationally in rushing with 1,314 yards.

Prior to joining the staff at Tennessee, McCorvey worked one season at South Carolina, where he served as the Gamecocks’ receivers coach.

McCorvey took the South Carolina job following an eight-year stay at the University of Alabama from 1990-97. He served seven seasons as the Tide receivers coach, and the 1996 campaign as the team’s offensive coordinator. He was the assistant head coach in 1997. Alabama had three top five final national rankings in his career.

During those first seven seasons under head coach Gene Stallings, Alabama posted a 70-16-1 overall record and played in six bowl games. The Crimson Tide won the 1992 national Championship and the SEC title. With McCorvey at the controls of the offense in 1996, Alabama finished 10-3 overall, including a win over Michigan in the Outback Bowl.

A native of Grove Hill, Ala., McCorvey is married to the former Ann Brown, and the couple has a son, Marlon.