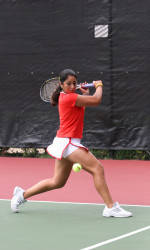 CHAPEL HILL, NC – The 24th-ranked Tigers stunned #5 North Carolina, 4-3, in Sunday women’s tennis action in Chapel Hill, NC. Clemson rebounded from a Tar Heel sweep in doubles action to post four singles victories and hand North Carolina just its second ACC loss of the season. Maria Brito clinched the Tigers’ 13th win of the season with a thrilling victory in a tie-breaker in the third set at the flight four position.

After trailing 3-1 in the match, Clemson earned three straight singles wins, including Brito’s clincher, to notch the needed four points. Alexandra Luc won her match over Laura Reichert, 7-5, 6-4, at flight five to narrow the gap to 3-2. Federica van Adrichem then tied the score with a 7-5, 6-3 defeat of Sara Anundsen in the number three contest, and Brito won the match for the Tigers.

Carol Salge recorded the first point for Clemson with a victory at the top singles position, upsetting 57th-ranked Caitlin Collins, 6-0, 6-3. The win was her 21st of the year and her fourth victory over a ranked opponent.

In other singles action, the Tar Heels’ 34th-ranked Jenna Long defeated Daniela Alvarez, 6-2, 6-2, at flight two, and Marie Scriba fell to Tanja Markovic of North Carolina by a 6-2, 6-2 margin in the flight six contest.

The Tigers dropped all three doubles matches on Sunday for just the second time this season. The ninth-ranked team of Salge and van Adrichem fell to the Tar Heels’ seventh-ranked duo of Anundsen and Long, 8-3, at flight one, while Collins and Markovic edged Clemson’s Alvarez and Luc, 9-8, in the flight two match-up. North Carolina’s Meg Fanjoy and Smith, ranked 46th, then defeated Brito and Scriba at the flight three position, 9-7.

The Tigers will conclude the 2006 regular season next weekend as they will play host to NC State and Wake Forest at the Hoke Sloan Tennis Center. Clemson and the Wolfpack will square off at 11:00 AM on Saturday, while Sunday’s match between the Tigers and Demon Deacons is slated for a 12:00 PM start time