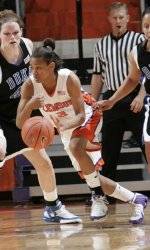 CLEMSON, SC – Clemson junior Tasha Taylor scored six points in the final minutes of the Thursday night’s game, but she was unable to help the Lady Tigers erase a second-half deficit, as Tennessee-Chattanooga won 73-64 at Littlejohn Coliseum.

The Lady Mocs improved to 2-1 on the year, while Clemson fell to 1-2 overall.

The first half was a tight affair that saw the lead change hands seven times and Tennessee-Chattanooga on top by a 32-29 margin at the break. The Lady Tigers opened the game with a jump shot from the wing by Carrie Whitehurst, and Moreemi Davis added a jumper within the first minute of play. Tennessee-Chattanooga took its first lead on an Anderson field goal at the 14:30 mark.

Clemson regained the lead on a Lele Hardy free throw and a Taylor jump shot put the Lady Tigers back on top by two, and Whitehurst drained a three to give Clemson its largest lead of the half at 24-19. Tennessee-Chattanooga then outscored the Lady Tigers 13-5 to close out the period.

The Lady Mocs then extended their lead to 10 points early in the second half as Hand hit two three-point shots. Clemson narrowed the deficit to seven points at 45-38 with 13:38 remaining in the game, but Tennessee-Chattanooga went on a 14-4 run in the next three and a half minutes to go up by 17. The advantage then remained in double figures until a jumper by Christy Brown cut the lead to eight points at the 3:51 mark.

The Lady Tigers came within seven at 69-62 on a Taylor jumper in the lane with 2:42 remaining and then again at 71-64 with just under a minute left on another Taylor field goal. However, Clemson was unable to convert its shots down the stretch and the Lady Mocs claimed the 73-64 victory.

Clemson will take to the road for the first time this season as they will travel to Columbia, SC on Monday night. The Lady Tigers will face in-state rival South Carolina at 7:00 pm at the Colonial Center.