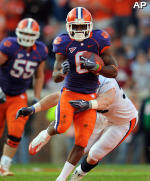 CLEMSON, S.C. (AP) — C.J. Spiller scored a touchdown Saturday in his final game at Death Valley and No. 18 Clemson beat Virginia 34-21 on the day the Tigers wrapped up their first trip to the Atlantic Coast Conference title game.

The Tigers (8-3, 6-2 ACC) won their sixth straight game, but had the Atlantic Division wrapped up as they kicked off thanks to North Carolina’s 31-13 victory against Boston College.

Spiller had a 4-yard touchdown run and set the ACC’s single-season all-purpose yardage mark, surpassing the 2,059 of Virginia’s Thomas Jones in 1999.

Virginia (3-8, 2-5) kept things close in the first half, its 21 points more than it had put up in any of its previous five games. However, the Cavaliers were shut out the final 30 minutes and lost their fifth straight.

It’s Clemson first visit to the title game after years of near misses. In 2006, Clemson lost four of its last five after starting 7-1 to fall from contention. A year after that, the Tigers were beaten by Boston College 20-17 in a division showdown.

This time, Spiller got to hold his hand up in triumph as he jogged off the field to the adoring calls of 77,000 at Death Valley.

Fans spilled onto the field as the game ended and the crowd sang “Happy Birthday” to coach Dabo Swinney, who turned 40 on Friday.

Swinney had banned the Boston College game from the team’s locker room area and told managers to keep news of the contest away from the players.

It was a day of memories for a player, Spiller, who’ll one day will likely have his name enshrined in Death Valley’s Ring of Honor.

Spiller was the last of Clemson’s seniors to take the solo run down the Death Valley’s famed hill in their last home games. Spiller kissed Howard’s Rock and skipped down holding a U.S. flag in honor of Military Appreciation Day as the large, orange-clad crowd roared in celebration.

The game that followed was supposed to be just as raucous for the Tigers, whose second-ranked ACC defense was expected to easily put away the league’s worst offense.

Perhaps it was clinching on Boston College’s loss, Virginia’s poor record or Tigers fans pointing to bigger games down the road against rival South Carolina or Tech for the ACC crown, but Clemson played early with little of the fire.

Clemson quarterback Kyle Parker was stopped short on fourth-and-goal at the Virginia 5 after Clemson recovered a fumble on the Cavaliers’ first play.

Each time the Tigers moved in front, Virginia was there with an answer.

Embattled coach Al Groh even used a couple of offensive tricks to keep the Cavs in it.

Receiver Vic Hall threw a 30-yard pass to Sewell after taking a lateral from his quarterback. Hall then took a reverse flip from Sewell and passed to a wide open Joe Torchia to tie things at 14-all.

Things went more to Clemson’s form in the second half, its defense forcing four straight three-and-outs and the Cavaliers were done.