Saying that Will Spiers enjoys a multitude of family ties to Clemson would be an understatement. The Tiger graduate punter recalls spending many fall Saturdays at Clemson football games while growing up, as both of his parents and many other members of his family attended the university.

His father, Bill, played football and baseball for the Tigers before going on to a 13-year MLB career. He was inducted into the Clemson Hall of Fame in 2007 and returned to the school through the Tiger Trust Program to serve as the senior offensive and special teams assistant for the football program. His grandfather, Bud, and uncle, Michael, also played baseball for the Tigers. The Cameron, S.C. native was raised donning the orange and purple with a burning desire to follow in his family’s footsteps.

“I knew I wanted to come to Clemson ever since I was a little kid, because we always came to games as a family,” said Spiers. “But as far as football, I went to Coach (Dabo) Swinney’s camp during my sophomore year (of high school). That was the first time I punted in front of the coaches here.”

However, Spiers did not only take snaps as a punter at Calhoun Academy, he was also the team’s quarterback. Additionally, as the son of a former MLB infielder, he followed the same two-sport track as his father and played high school baseball. In fact, Spiers considered a few opportunities to pursue baseball on the college level. But it was the punting lessons from his father, who was the Tigers’ punter in 1986, that influenced him as a young athlete the most.

“I always punted growing up because my dad taught me at a young age. Then in my senior year, I got offered a preferred walk-on spot at Clemson, and that made my decision pretty easy. I believed that walking on to the football team was the best route for me.”

As a freshman in 2016, Spiers redshirted and took the year to develop as a punter. As soon as fall camp began the following season, Swinney informed the team that whichever candidate won the starting punter position would not only make the roster, he would receive a scholarship. Spiers saw his opportunity, seized it and has never looked back.

After earning the job, Spiers has served as the starter for five consecutive seasons and broke the school record for career starts with his 58th on Sept. 11 against South Carolina State. But that was not the only record he broke.

Entering the 2021 season, Spiers already held school records for career punts (211), punts inside the opponent 20 (81) and punting yards (9,483). His performance on the field earned him the recognition of being a semifinalist for the Burlsworth Trophy in 2020, which is awarded to the most outstanding player to begin his college career as a walk-on. For Spiers to reach that point, he recognized that the key to his progression was mastering his craft and establishing consistency.

“When I first got here, I was just an athlete that could punt. I really had to learn to specifically be a punter. Each year, I have developed more and more as a punter, both technically and physically. I learned how to kick the right way and become more consistent.”

Spiers carried this success over to the classroom as well, as his grades earned him an array of academic accolades. He was named to the ACC Academic Honor Roll in each of his first five seasons (2016-20) and received All-ACC Academic honors three times, becoming one of only 19 players in Clemson history to receive that honor three times. This value for academic achievement is a priority stemming from the Spiers family, as he referenced his upbringing and his parents placing an importance on grades as a source of motivation.

In addition, Spiers serves as an ambassador for the P.A.W. Journey initiative, which encourages student-athletes in the football program to develop leadership skills and focus on personal growth. In his sixth year on the team, Spiers has seen his maturity and experience through P.A.W. Journey serve as crucial factors in establishing his voice.

“It’s been great. I joined it my junior year and it’s a great leadership role. It’s a way to take a leadership initiative, use my voice and be a voice on the team to communicate different things. With age, you become a leader, but it doesn’t take a senior to be a leader. You just have to develop the right skillsets, and P.A.W. Journey has enabled me to do that.”

Spiers graduated in December with a bachelor’s degree in construction science & management, but he did not hesitate to take advantage of the NCAA’s blanket eligibility waiver. He viewed the opportunity as a “free year” of college football and a chance to further improve his punting skills while competing for championships with the Tigers. Although his personal future remains somewhat uncertain, Spiers has prepared himself for anything it may hold and has his eyes set on consistent improvement.

“For this season, I’m trying to be the best version of myself that I can be. I also want to help this team in any way that I can to be successful and reach all of our team goals. Then after the season, I’m going to pursue the NFL and train.”

Spiers hopes to receive the opportunity to prove himself on an NFL team, the same way that he did as a walk-on at Clemson. But for now, he is just happy to take the field as a Tiger and proudly wear the Spiers family name on his back. 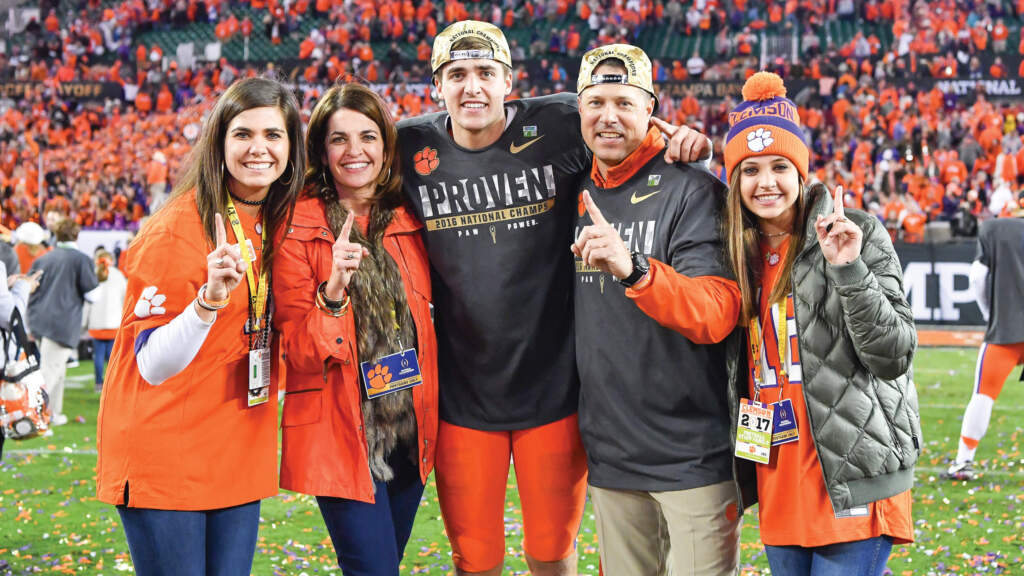