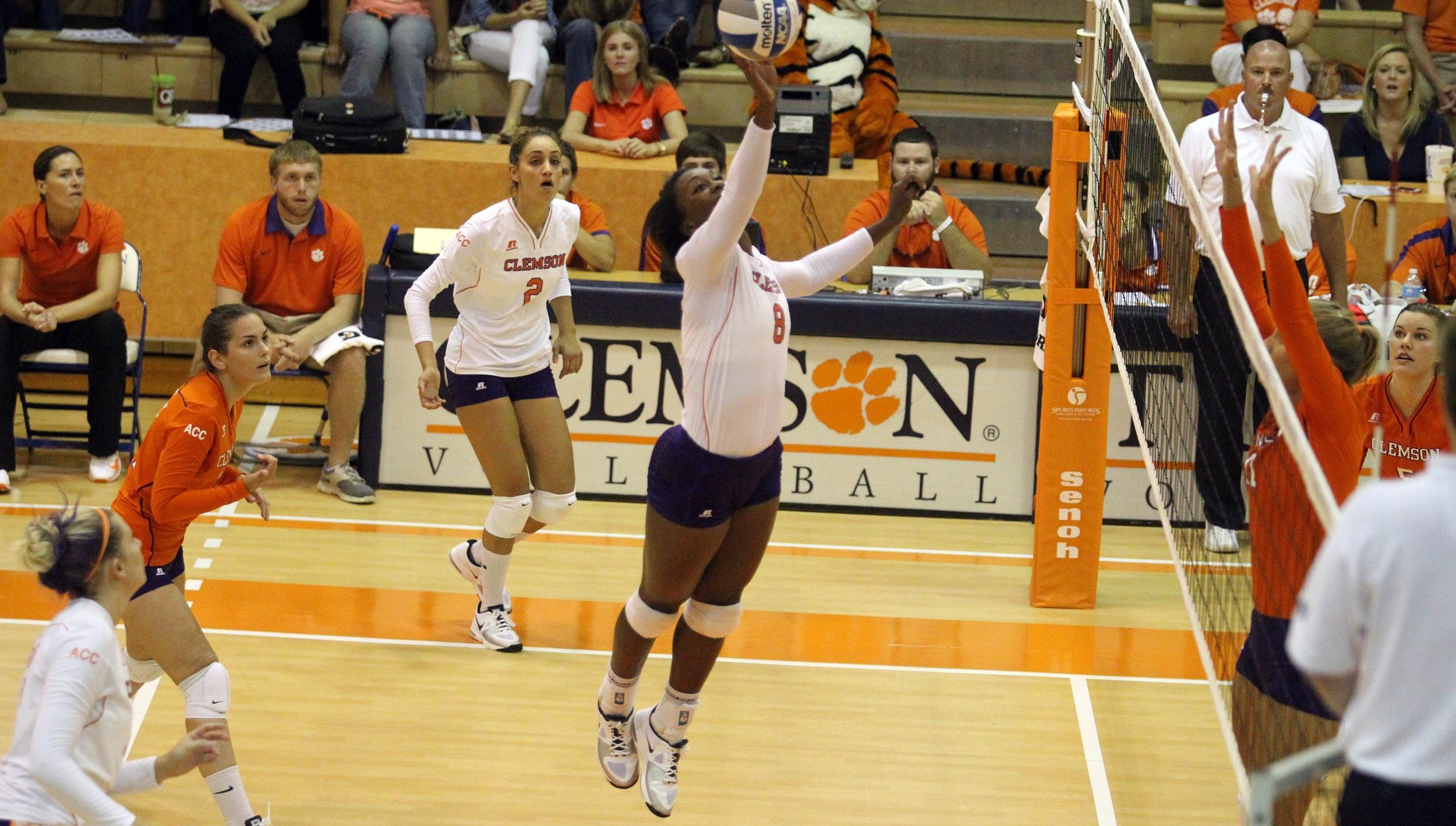 CINCINNATI, OH – After dropping a 3-0 (25-12, 25-16, 25-13) decision to No. 7 Michigan (1-0) in the first match of the Xavier Invitational, the Clemson Volleyball team bounced back for a 3-1 (25-14, 25-16, 20-25, 25-20) win over Northern Kentucky (0-1) in the nightcap. After a sluggish offensive match against the Wolverines, Mo Simmons and Karis Watson carried the load, tallying 18 and 13 kills, respectively, and Clemson (1-1) ratcheted up the defense with 11.0 blocks.  “I think it was really important to win the second match,” said Jolene Jordan Hoover. “Especially as far as being young with a lot of new faces on our team and seeing how we respond. It was very important for us to be able to come back and split today. It was a big win for us.”  Clemson improved to 1-2 against NKU all-time in the first meeting since 1980. Clemson fell to 0-2 against Michigan all-time in the first meeting since 2002.  “We made a few adjustments with our positions against Northern Kentucky, and our girls responded well with them. I really felt like we passed much better in that second match.”  One of the changes came in the way of Kristin Faust moving to libero. In the second match, the junior had 13 digs to lead Clemson, and was able to help with ball control, especially on serve receive. Faust spent her first two seasons as an outside hitter, but is working her way back from a torn ACL in February.  Watson’s emergence in the second match was key. Though she has played more than 100 sets in her career, Watson tallied career highs in kills (13), attacks (31), points (16.0), and added six block assists. Simmons played a strong all-around match with 18 kills against just three errors in 50 swings (.300), while also tallying nine digs, a career-high four aces, and two blocks.  Hannah Brenner took an aggressive approach and filled the stat sheet to the tune of 37 assists, eight digs, five kills, and four blocks. She guided the offense to .241 hitting in the second match, and found Simmons nine times in the fourth set in putting away a scrappy Norse squad.   Having Faust at libero also allow Collier to step in and play in the back row, and she tallied 12 digs, including 11 in the first two sets.  In the season-opener, Clemson faced the tall-task of taking on seventh-ranked Michigan. The Wolverine defense kept Clemson’s attack at bay for the duration of the match behind ten team blocks, including five each in the first and third sets. Simmons tallied 11 total kills, but also had seven errors. No other Tiger registered more than four kills, with that coming in the form of middles Beta Dumancic and Karis Watson.  Dumancic also added three blocks in her Clemson debut, while Watson added two of her own. On the other side of the net, Molly Toon had 11 kills to tie Simmons, while Lexi Erwin and Abby Cole had nine kills apiece. Michigan libero Tiffany Morales also had a strong performance with 15 digs.  Clemson will close play at the Invitational against the host Musketeers on Saturday at 4:00 pm in the Cintas Center. The Tigers play host to the Big Orange Bash beginning on Friday in Jervey Gym.