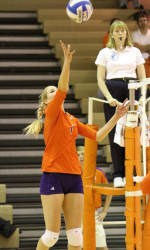 Reigning ACC Player-of-the-Week Sandra Adeleye continued her stellar play, pounding out 18 kills against two errors for a .410 mark. Serenat Yaz led all played with 20 kills, and hit a remarkable .425 from the outside, while also tallying 14 digs. Hannah Brenner continued her good decision-making with 49 assists, eight digs, and four kills.

Alexa Rand was the third offensive option for the Tigers with eight kills in 16 swings with no errors and two total blocks. Mo Simmons had seven kills and a career and team-high 22 digs, while libero Natalie Patzin had 18 digs and was 32-for-32 in serve receive.

The Tigers had a big edge in the service game, recording four aces and no errors, while Maryland had three aces and eight service errors. It was Clemson’s first match without a serve errors this season. Maryland setter Remy McBain had a big day, going for 10 kills, 12 digs, and 48 assists, while Mary Cushman had 19 kills to lead the Terps.

Maryland got on the big board first with a 25-18 win after getting out to a big lead and hol,ding on down the stretch. Cushman had 8 kills in the set in 19 swings. The Tigers sputtered to just a .093 hitting set, despite hitting into just three blocks. An early 6-1 run gave the Terps the edge they needed to win the set. Mo Simmons had 11 digs in the set, the second-most for a Tiger this year in a set.

Clemson bounced back with equal parts impressive offense and defense in a gritty second set. The teams traded points, with neither grabbing more than a two point edge for most of the set. The Tigers were able to side out on 19 of 22 opportunities, and hit .571 with 20 kills and no errors in the frame. Adeleye had eight kills, and Yaz had five in the set to pace the Tigers.

The Tigers took a crucial third set out of intermission, 25-22. The hot hitting continued, as Clemson hit at a .350 mark. Clemson went on a 6-2 run with a 14-23 lead out of a timeout to blow the set open. The teams traded side-outs until a Maryland ace forced a Hoover timeout, out of which Brenner placed a kill in the back corner to clinch the set.

The Tigers will now fly up to Boston to take on the BC Eagles on Sunday at noon, before returning to Tigertown.