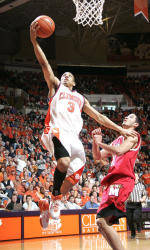 Vernon Hamilton to be Honored on Senior Night

“I’ve been through it all”.

That opening statement from Clemson senior point guard Vernon Hamilton in a recent conversation says a lot more than the words themselves. Through different circumstances, Clemson’s senior point guard who will be playing his final home game against Miami (FL) on February 28, seems to have taken the best that each opportunity had to offer, learn from it, and improve.

He was recruited to Clemson by Larry Shyatt and has played his entire career for Oliver Purnell. “I was recruited by Coach Shyatt,. I was able to learn a lot from him during the recruiting process, and he and I are still friends today.

“When Coach Purnell came in he really changed the program around. I’m glad I’ve been able to be a part of it and you can tell the program is headed in the right direction. It’s great to look around and see Littlejohn full, and all the students and fans anticipating the games this year.”

The Clemson program has made a strong improvement since Hamilton and Purnell came to campus. In 2003-04, Hamilton struggled as a freshman point guard in the ACC, meeting the challenges of current NBA players Jarrett Jack of Georgia Tech, Chris Paul of Wake Forest and Raymond Felton of North Carolina.

But, the Tigers have increased their regular season victory total each year since. And, Hamilton has been a key to that improvement. He has enhanced his scoring average, field goal percentage and turnover ratio each year. A victory against Miami (FL) on Wednesday would give Clemson its first 20-win season since 1998-99, Shyatt’s first year.

A decision Hamilton made long ago as a high school senior helped shape his four years at Clemson. As a two sport star out of Benedictine High School in Richmond, Virginia, Hamilton had the opportunity to play football or basketball at the next level. He was first team all-state on the gridiron and was on a lot of recruiting lists at the end of senior season.

“I played football, and thought that I was good at it, but basketball was in my heart. When Clemson gave me the opportunity to play basketball in the ACC, I knew I couldn’t turn that down.”

Now Hamilton is one of the elder statesmen of the ACC, and has a multitude of memories. When asked who was the best player he has ever faced, his answer is somewhat surprising.

“I came in with Raymond Felton and Chris Paul, all those guys that are now in the pros. But the toughest guy I played against has been Jarrett Jack from Georgia Tech. He was big, about 6’4″,physical, and a tough match up.”

When asked what game was his most memorable, his answer is again somewhat surprising. Instead of a win, it was a loss. “The Duke game at Cameron this year. It is something I’ll be able to tell my kids about. Being down five at the end, scoring five straight to tie it up, controversial ending…It was memorable that is for sure.”

Hamilton has given Clemson fans great memories the last four years. It started his freshman season when he nearly had a triple double against Boston College. He had 13 points, 11 rebounds and nine assists against just one turnover in a surprising victory over a Boston College team that would win 24 games and advance to the NCAA Tournament. It is the closest a Clemson guard has ever come to getting a triple double.

Hamilton enters his final home game as the school’s career leader in steals with 253, a total that is eighth best in ACC history. He is also sixth in career assists with 367 and is fifth in career scoring among Clemson point guards with 1142. He has taken Clemson to at least 19 wins each of the last two seasons, the first Clemson point guard to do that since Marion Cash in 1988-89 and 1989-90, and is just the fourth Clemson point guard in history to accomplish the feat.This season he is averaging a career best 12.6 points a game and has been Clemson’s top scorer in ACC game and in road games.

Looking ahead, Hamilton knows he has a challenging job the rest of this season, as he leads the Tigers into postseason play. “Being a team leader, I try to explain to the guys that I’ve been through it. We’re an athletic team, the most athletic team since I’ve been here, and we’re capable of finishing on a streak like we started. We are a team that’s known for finishing strong, just like last year, so as long as we play together as a team and play well, we can go as far as we want.”

He also knows that finishing well will increase his opportunity to play in the future. “My number one goal right now is helping this team finish the season strong. I certainly want to continue my career next year and hope to be selected for some pre-draft camps and summer leagues. Playing here at Clemson under Coach Purnell is going give me a lot of opportunities.”

When asked finally what he thinks his “stamp” on the program will be, and where the program is headed, Hamilton humbly defers to his coach. “This team really progressed this year. We were the last undefeated team, we were ranked for eight weeks, and that says a lot about Coach Purnell and his coaching ability.

” Looking back at how I struggled my freshman year to the Georgia Tech game last year where I broke the all time steals record, to becoming a more complete player as a senior, I owe everything to Coach Purnell and his knowledge of the game. He taught me how to be a better defensive player and how to use my quickness. I hate that this is my last year. This program under Coach Purnell is definitely on the rise. I’m sure that the underclassmen now are headed for a great ride.”