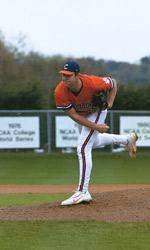 The top-ranked Clemson baseball team rallied from its biggest deficit of the season to tie the game but fell to Georgia 5-4 on Tuesday night at Foley Field. The Tigers dropped to 27-3 while the Bulldogs improved to 18-10.

The Bulldogs threatened in the bottom of the ninth after singles by Marshall Szabo and Chad Lytle with one out. Clemson shortstop Khalil Greene tracked a pop up by Darryl Blaze back into short left field and stretched to make an incredible catch for the second out even as he was undercut by L.J. DeMaino. But the Tigers were not out of the clear yet and David Coffey’s line drive to left field fell in for a game-winning double after DeMaino slipped in the outfield.

Jeff Hourigan (0-1) was the hard luck loser for Clemson. Jefferey Carswell (2-3) picked up the win for Georgia. Four Tigers had two hits each to lead the Tiger offense.

Georgia opened the scoring in the bottom of the first by roughing up Clemson starter Steven Jackson. Lytle led off the inning with a triple down the first baseline and came home on Lee Mitchell’s single. A single by Jon Armitage drove home two runs and was followed by Clint Sammons’ RBI single that knocked Jackson out the game. Reliever Patrick Hogan got the last out to strand runners on second and third, but not before Georgia jumped out to a 4-0 lead.

Clemson got two runs back in the top of the second. Jarrod Schmidt’s double. It looked as if the runners would be stranded until Roberto Valiente’s two-strike, two-out single knocked them in.

The Tigers evened the score in the third. They put runners on second and third again after Khalil Greene walk and Jeff Baker’s double. Michael Johnson singled in Greene and Baker scored one batter later. Schmidt lined out but Bulldog second baseman Szabo throw to first bounced off of Johnson’s back and into foul territory, allowing Baker and the Tigers to tie the game at four.

The game turned into a pitcher’s duel with Hogan doing his part for the Tigers. The righthander pitched 6.0 innings, allowing just three hits and one walk while striking out three. Georgia’s Fellows settled down after the third inning and combined with relievers Mickey Westphal and Carswell to hold the Clemson offense at bay.

The two teams will square off tomorrow at 7:15 at Doug Kingsmore Stadium.