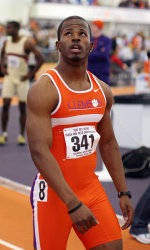 Fayetteville, AR – Clemson junior Travis Padgett finished third in the 60m dash Saturday at the NCAA Indoor Track & Field Championships, helping the Tigers to a 12th-place finish as a team. It marks the second straight season Clemson’s men’s program has claimed a top-15 finish at the indoor national meet.

“Our guys did a good job overall,” said Bob Pollock, head coach at Clemson in his 20th season. “For us to come out with a 12th-place finish with three guys competing says a lot about the quality of guys we brought.”

Padgett will be included on the All-America list, which will be released Sunday by the U.S. Track & Field and Cross Country Coaches’ Association (USTFCCCA), by virtue of his third-place showing Saturday night. The Shelby, NC product will now have five All-America honors in his career.

Padgett is the first Tiger sprinter to place in the top three in the 60m dash in consecutive years since Michael Green won the national championship in the 55m in 1992 and 1993. Padgett won the event last year at the indoor national meet.

Richard Thompson of LSU won the event with a time of 6.51 seconds, holding off teammate Trindon Holliday (6.54). Padgett’s time was a season-best 6.60, one day after having run a 6.61 in the preliminary round.

Clemson wrapped up the NCAA Indoor Championships with a pair of top-three performances. On Friday, senior Mitch Greeley earned a runner-up finish in the pole vault and scored eight points for the Tiger squad.