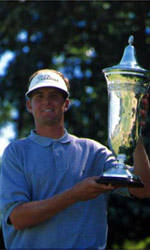 Clemson, SC – Clemson rising junior D.J. Trahan won the South Carolina Amateur Sunday with a four-day score of 279, nine-under par. He defeated three-time defending champion Lucas Glover, who was a senior at Clemson last season. Both players will now go to Sea Island, GA and compete for the United States team in the Walker Cup.

Trahan shot a 72 on Sunday to win by four shots. Glover had a 69 on Sunday and closed to within one shot after nine holes, but Trahan made four birdies on the backside to gain the victory. Glover finished second with a 283 total for the four rounds. A Clemson golfer has now won the South Carolina Amateur four consecutive years.