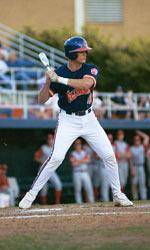 CLEMSON, SC – Top-ranked Clemson used a three-run fourth inning to build a 4-0 lead and hang on for a 5-3 win over third-ranked Wake Forest Saturday night before 4,391 fans at Doug Kingsmore Stadium. The Tigers improved to 37-6 and and 11-3 in the ACC while dropping the Demon Deacons to 36-7 and 15-4 in the ACC. Clemson is 6-0 this season after a loss.

B.J. LaMura (5-1) earned the win for Clemson by battling for five innings and allowing two runs off two hits. The junior righthander threw 101 pitches and struck out four while walking five. Thomas Boozer pitched 3.1 innings of middle relief and Patrick Hogan picked up his third save of the year by recording the final two outs. Seth Hill (3-1) got the loss for Wake Forest.

LaMura walked the first two batters of the game before settling down and retiring the next three hitters. Clemson got on the board with a two-out rally in the bottom of the first. Khalil Greene singled to right field and next batter Michael Johnson sent a 2-2 delivery off the wall in right to score Greene for a 1-0 lead.

The Tigers put three runs up in the fourth inning. Jarrod Schmidt got things going with a walk and Russell Triplett executed a hit and run with a single to right that put runners on the corners with one out. After Triplett stole second, David Slevin git a sacrifice fly to center that scored Schmidt and moved Triplett to third. Seth Miller followed with a single through the left side and Roberto Valiente hit a triple to right center that gave the Tigers a 4-0 advantage.

Wake Forest finally broke through in the sixth inning. After LaMura walked the first two batters of the inning, Head Coach Thomas Boozer. Boozer gave up an RBI single to Jeff Ruziecki and Ben Ingold bunted over Ruziecki and Brad Scioletti to give the Demon Deacons runners at second and third with one out. Boozer struck out Hubbard looking but next batter Bourassa singled through the left side to score a run and cut the Tiger lead to 4-2. Boozer got out of the inning by striking out Jamie D’Antona. D’Antona entered the game for injured second baseman Nick Blue in the third inning although Wake Forest issued a release prior to the game saying he had been suspended four games for violating team rules.

With runners on first and second and two out in the sixth inning, Demon Deacons relief pitcher Daniel Davidson walked Kyle Frank and Greene to score a run and extend the Clemson lead to 5-2. Greene’s RBI was the 239th of his career, tying former NC State player Jake Weber for fifth place in ACC history. Wake Forest answered in the top of the seventh when Stephen Ghutzman homered to left field off of Boozer, the first homer allowed by the reliever all year. Boozer and Hogan combined to shut out the Demon Deacons the rest of the way and secure the victory.

The two teams wil square off tomorrow for first place in the ACC. First pitch is scheduled for 2:00 PM.