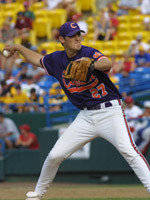 Clemson totaled 16 hits, including multiple-hit games by five Tigers, to defeat #6 Florida State in the second game of a doubleheader at Dick Howser Stadium Sunday afternoon. Shane Robinson’s hitting streak ended at 40 games after he went 0-for-4 with a walk. He ended the game with a line-drive out to right field, as former Tiger Rusty Adkins (1965-66) holds on to the ACC record of 41. Clemson improved to 15-11 overall, 6-3 in ACC play. The Seminoles fell to 29-7 overall, 7-2 in ACC play.

Robert Rohrbaugh (3-1) earned the win by pitching 6.0 innings, allowing three runs on six hits. Jeff Hahn earned his first save of the year by allowing just one baserunner (on a single) in 3.0 innings pitched with three strikeouts. Seminole starter Bryan Henry (1-2) suffered the loss. Florida State used seven pitchers in the game.

Herman Demmink led the game off with a home run to right field, his third of the season. Brad Chalk followed with a single up the middle and Taylor Harbin singled to right-center. After Tyler Colvin’s fly ball moved Chalk to third, Harbin was thrown out at second trying to steal after Travis Storrer missed on a hit-and-run. Storrer then left the runner stranded on third when he struck out looking.

Florida State evened the score in the second inning on a two-out single through the left side by Ryne Jernigan. Ryne Malone, who scored on the play, singled and stole second earlier in the inning.

Another home run gave the Tigers a 2-1 lead in the fourth inning. Kris Harvey ripped his team-leading sixth homer of the year to left field into a stiff breeze blowing from left to right.

In the fourth inning, Widmann led off with a bunt single to third base and went to third on Adrian Casanova’s soft single through the right side on an 0-2 pitch after he was unable to get a bunt down twice. Both hits were the first of the series for the respective players. Demmink then ripped a hard grounder up the middle, but second-baseman Tony Thomas, Jr. made a nice stab to start a 4-6-3 double play. Widmann scored on the play to give the Tigers a 3-1 lead.

The Tigers put together a two-out rally to add four insurance runs in the sixth inning. Two-out singles by Widmann and Casanova put runners at the corners, and Demmink grounded a single up the middle to plate Widmann. Chalk followed with a walk to load the bases, and Harbin hit a two-run single through the left side. It was the first time all series that the Tigers managed to plate multiple runs in an inning. After Colvin was hit by a pitch to load the bases again, Storrer reached on an infield single to shortstop to bring home another run. It was Storrer’s first hit of the series.

Florida State cut into the Tiger lead in the bottom of the sixth inning with two runs. Brant Peacher hit a one-out single up the middle and advanced to third on Malone’s double to left field, his second of the game. Thomas brought home Peacher on an RBI groundout to third base. Daniel Wardell followed with a double high off the wall in right field on a full-count pitch to plate Malone. After walking Jernigan, Rohrbaugh avoided further damage by striking out Ruairi O’Connor.

Neither team scored again, as Storrer made a running catch on Robinson’s liner in the right-center gap in the ninth to end the game.

Clemson will travel to Athens, GA to take on Georgia Tuesday at 7:00 PM.