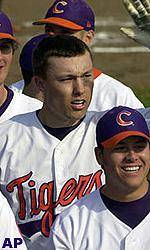 CLEMSON, SC – The third-ranked Clemson baseball team opened the 2002 season with a 7-4 win over Auburn on Friday afternoon at Doug Kingsmore Stadium. Steve Reba (1-0) earned the win while Paul Harrelson picked up his first career save. Levale Speigner (2-1) picked up his first loss of the season for Auburn, which dropped to 7-2.

The home-opening win was the seventh in nine tries for Clemson under Head Coach Jack Leggett. Clemson is now 5-0 alltime in home openers against Auburn.

The fireworks began early for Clemson with three first-inning runs. After Kyle Frank singled and moved to second on an error, Khalil Greene singled through the right side to score Frank. Jeff Baker came to the plate and then crushed the ball to deep center, nearly clearing the 40-foot wall, to give the Tigers an early 3-0 advantage.

Auburn responded with two runs in a two-out, third inning rally. It loaded the bases with a single by Bobby Huddleston sandwiched between walks by Trent Pratt and Mike Mueller. Scott Schade singled home a run and Matt Grooms walked before Reba got out of the jam.

Baker extended the Clemson lead to 4-2 when his shot to center just cleared the fence and the glove of a leaping Josh Todd. The home run was the 36th of Baker’s career, moving him to sixth on the Clemson all-time list. It was also the eighth time in his career that Baker homered twice in a game, a school record.

The Tigers of Auburn would not quit, however, and scored runs in the fourth and sixth innings to knot the game at four. Clemson regained the lead in the bottom of the sixth thanks to two sacrifice bunts. Singles by Johnson and Jarrod Schmidt were followed by David Slevin’s sacrifice to give the Tigers runners at first and third with one out. Leggett then called for a squeeze play which Russell Triplett executed perfectly to score Johnson.

After another RBI-single by Greene in the seventh, Johnson scored again when he roped a line drive down the right field line that made the final margin 7-4. Greene, Baker and Johnson, the 3-4-5 hitters in the Clemson batting order, combined to bat 7-12 with six RBIs on the day. B.J. LaMura pitched two solid innings of relief before giving way to Harrelson, who struck out two of the three batters he faced in the ninth.

Game two will begin at 2:00 PM on Saturday. Matt Henrie (0-0) is slated to take the mound for Clemson and Colby Paxton (2-0) is scheduled to pitch for Auburn.