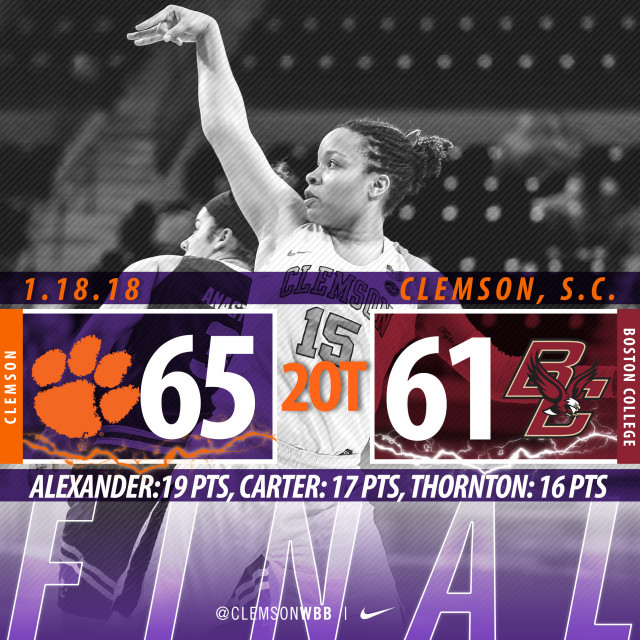 CLEMSON, S.C. – Three players, Jaia Alexander, Alexis Carter and Kobi Thornton, combined for 52 of the Clemson women’s basketball team’s 65 points in a 65-61 double-overtime thriller over Boston College on Thursday night at Littlejohn Coliseum. The Tigers’ outscored the Eagles 8-0 over the final 2:18 to earn the conference victory and improve to 11-8 (1-5 ACC), while Boston College fell to 6-12 (1-4 ACC) with the loss.

The Tigers had a good first quarter offensively, shooting 50% (6-for-12) from the floor, but the Eagles also made six baskets and the score was tied 14-14 at the end of the period. In the second quarter, the Clemson defense picked up the pace, holding Boston College to just 16.7% (2-for-12) from field goal range. The Tigers outscored the Eagles 14-3 in the period, thanks in part to seven second-quarter points by sophomore Jaia Alexander. Alexander had 11 at the half and senior Alexis Carter had eight, while the Tigers held a 27-18 lead.

Boston College outscored Clemson 21-12 in the third quarter, thanks in large part to hitting 14-for-16 shots from the free throw line. The game was tied at 39-39 at the end of the third period, and then again at 47-47 at the end of regulation, resulting in Clemson’s first overtime game of the 2017-18 campaign.

After a 6-6 tie in the first overtime, both teams picked up the intensity in the second overtime period. Boston College hit two threes in the first two and a half minutes to take a 61-57 lead, before the Tigers came roaring back, outscoring the Eagles 8-0 in the final 2:18 to end the game with the four-point victory. Junior Danielle Edwards hit the go-ahead three-pointer with 1:36 on the clock, and then sunk two free throws with 10 seconds remaining to seal the victory for the Tigers.

Carter had a great night, scoring 17 points on 8-for-14 from the floor while playing a team-high 45 minutes. The senior also contributed four assists and four steals to the Tiger effort. Alexander finished the game with 19 points and eight rebounds, and fellow-sophomore Kobi Thorntonrecorded her first double-double of the season with 16 points and 10 rebounds. Thornton also tallied three steals and blocked three shots in the contest.

This was Clemson’s first double-overtime Atlantic Coast Conference win in program history, and only the third double-overtime win overall, as the Tigers defeated South Carolina in double overtime in 2009 and Radford in 1990.

Clemson returns to action on Sunday, Jan. 21 when it travels to South Bend to face No. 5/2 Notre Dame. The game between the Tigers and Irish is set to tip off at 1 p.m. on Sunday.