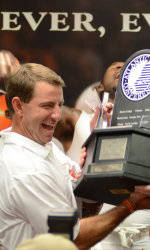 The ninth-ranked Tigers obeyed that message to their fullest Saturday afternoon in Death Valley as kicker Chandler Catanzaro nailed a 43-yard field goal as time expired to complete one of the best comebacks in Clemson history, while also clinching the ACC’s Atlantic Division Championship at the same time.

Catanzaro’s game-winner lifted Clemson to a 31-28 victory over Wake Forest, which led by 14 points following Brandon Pendergrass’ 33-yard touchdown run with 5:32 to play in the third quarter. It was the third time this season the ninth-ranked Tigers rallied from 14 or more points to earn a win. Clemson had overcome a 14-point deficit to win just nine times in 114 years previously.

Clemson fought back from 14 points down to beat Auburn on Sept. 17 and 18 points backs to beat Maryland on Oct. 15.

“I guess you can call us the Cardiac Cats,” Clemson quarterback Tajh Boyd said.

The Tigers (9-1, 6-1 ACC) were definitely that on Saturday. Thanks to 50-yard punt return by Michael Campanaro and two turnovers which led to Pendergrass scores, Wake Forest built a 28-14 lead in the third quarter.

“That third quarter was a disaster,” Clemson Head Coach Dabo Swinney said. Clemson gave up 21 points in the period, the most it had yielded in a quarter all season.

“Sometimes, that is how it goes with us,” Boyd said. “We get down and we have to claw our way back. But, we have a lot of guys that battle and we don’t ever give up.”

Boyd led the comeback by answering Pendergrass’ second third-quarter touchdown with a 7-yard pass to tight end Brandon Ford, who caught three passes for 51 yards. That touchdown capped a 10-play, 68-yard drive which saw Boyd connect on 5 of 5 passes for 58 yards.

It was a nice bounce back for Boyd, whose interception on the previous drive setup Pendergrass’ 33-yard score. Boyd finished the game 27-of-43 for 343 yards and two scores, but until that final drive in the third quarter, he had not played as well as he had done through the first nine games of the season.

“I was disappointed in myself when that happened,” he said. “I know I’m better than that. I just made silly mistakes. Rashard Hall came to me and (Jonathan) Meeks came to me and said, `We got to have you. We need you.’

“I looked at the clock and there was nine minutes left, and I thought to myself, `We worked this hard and worked this long for us to come out here and lose this game?’ In my mind, I was like, `This is not going to happen.'”

But it almost did. After getting the ball back, Clemson moved from the shadow of its own goal to its own 33, but faced a fourth down-and-inches. Swinney elected to go for it, and Boyd was stuffed for a loss.

“They don’t come to me and ask about those things – that’s not my decision, but our defense went out there and did what they are supposed to do,” Clemson Defensive Coordinator Kevin Steele said. “They did their job. They made a stop and got the ball back.”

“After that, I just tried to put the ball in playmakers hands and that’s all I can ask for,” Boyd said. “I’m just glad they made plays.”

Those plays consisted of a third down pass to DeAndre Hopkins, then an 8-yard pass to Jaron Brown and a 20-yard pass to Ford, which set the Tigers up at the Wake 12. Two plays later, Boyd found Brown for 10 yards over the middle for the equalizer, tying the game at 28-28 with 5:27 left.

Clemson did all of this after Watkins, who became just the fourth Clemson receiver to eclipse 1,000 yards in a season, left the game with a sprained shoulder in the third quarter. The X-rays came back negative.

With the game tied, it became the defense’s turn to step up. After a disappointing third quarter in which they allowed Pendergrass to get over 100 yards with those two long touchdown runs, they held the Demon Deacons (5-5, 4-3) to just five yards of offense in their last two possessions.

“There were just a lot of make ups for things that happened today, and for last season,” Clemson defensive tackle Rennie Moore said.

Boyd and the offense set Catanzaro up for what could have been a potential game-winning kick with 1:18 to play, but his kick was wide right from 30 yards out. But, like Boyd and the defense, the Tigers’ kicker got a second chance to redeem himself and this time the former walk-on was true.

“We experienced adversity, but we never gave up,” he said. “It’s 60 minutes or however long it takes. I’m so proud of my team for giving me the opportunity to make the second one. I thank them so much.”