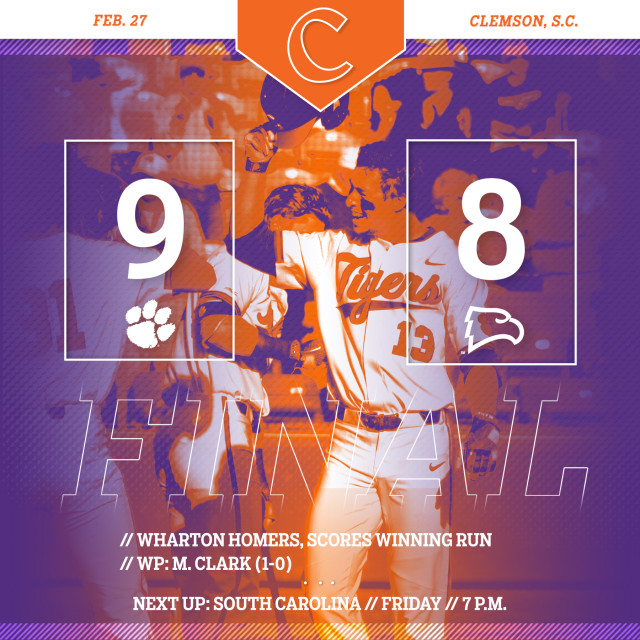 Tigers Walk Off With 9-8 Win Over Winthrop in 10

CLEMSON, S.C. – Kyle Wilkie hit a walkoff single with one out in the 10th inning to lift No. 7 Clemson to a 9-8 win over Winthrop on Tuesday afternoon. The Tigers, who defeated Winthrop for the third year in a row with a walkoff single, improved to 8-0, while the Eagles dropped to 3-6.

Chris Williams hit a three-run homer, his third long ball of the year, in the first inning. Two batters later, Drew Wharton belted a solo home run, his fourth homer of the season, to give Clemson a 4-0 lead. But the Eagles responded with a run in the second inning and four runs in the third inning after a costly error, just Clemson’s fourth of 2018. Winthrop tacked on two runs in the fourth inning and a run in the top of the sixth inning to build an 8-4 lead.

The Tigers rallied with three runs in the bottom of the sixth inning, keyed by Wharton’s run-scoring double and RBI singles by Grayson Byrd and Wilkie. With one out in the ninth inning, Patrick Cromwell crushed a solo homer, his first of the year, to tie the score 8-8. In the 10th inning, Wharton led off with a walk and moved to third base on Byrd’s single on a perfectly-executed slash-and-run. Two batters later, Wilkie laced a single up the middle to plate Wharton for the winning run.

Clemson plays the No. 23 Gamecocks this weekend in three games at three different sites, beginning with a Friday contest at South Carolina at 7 p.m., on SEC Network.