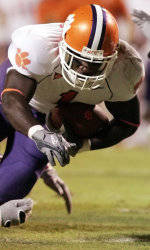 James Davis ran for a career-high 143 yards and two touchdowns before leaving with a broken wrist, Charlie Whitehurst threw for two more scores and the Tigers beat North Carolina State 31-10 on Thursday night for their first win in more than a month.

The loss was the Wolfpack’s sixth in a row at home to a Division I-A opponent – all in the Atlantic Coast Conference – and led to many early departures from another sellout crowd at Carter-Finley Stadium. To qualify for a bowl, N.C. State (2-3, 1-3) must win four of its final six games, a stretch that includes trips to No. 4 Florida State and No. 14 Boston College.

None of that matters to the Tigers (3-3, 2-3). After beating Maryland on Sept. 10, they lost their next three games by a total of 13 points, with two going into overtime. Clemson shook off those memories with a balanced offensive performance, piling up 489 yards while burning the Wolfpack with a variety of deceptive plays.

Whitehurst finished 22-for-31 for 246 yards, and Davis ran for their best total in exactly four years, when Woody Dantzler had 184 yards in a loss to N.C. State.

About the only Clemson did wrong was commit penalties. Coming into the game, it ranked second in the country with less than four infractions a game, but that discipline disappeared against the Wolfpack.

The Tigers were flagged nine times for 80 yards, including a pair of personal fouls in the second quarter that helped N.C. State score its only touchdown. Gaines Adams roughed punter John Deraney to keep the drive alive, and linebacker Nick Watkins later hit quarterback Jay Davis late to move the ball to Clemson’s 20.

Darrell Blackman did the rest from there, shrugging off three tackles before sprinting to the end zone to cut the Tigers’ lead to 21-7. The run was part of a dazzling game for the sophomore, who finished with 219 yards of total offense, including 161 on three kickoff returns.

Still, it wasn’t enough. The Wolfpack made their own share of mistakes, particularly while falling behind in the first half. Blackman muffed a punt and later fumbled after catching a screen, Toney Baker coughed up the ball twice and N.C. State jumped offsides six times.

And now coach Chuck Amato might have a quarterback controversy. Davis was benched for a while in the fourth quarter and replaced by Marcus Stone. On Stone’s first play, he threw a 29-yard pass to Lamart Barrett to get the Wolfpack in scoring position.

But a fourth-down pass to Tramain Hall in the end zone fell incomplete, ending what essentially was the final chance for N.C. State.