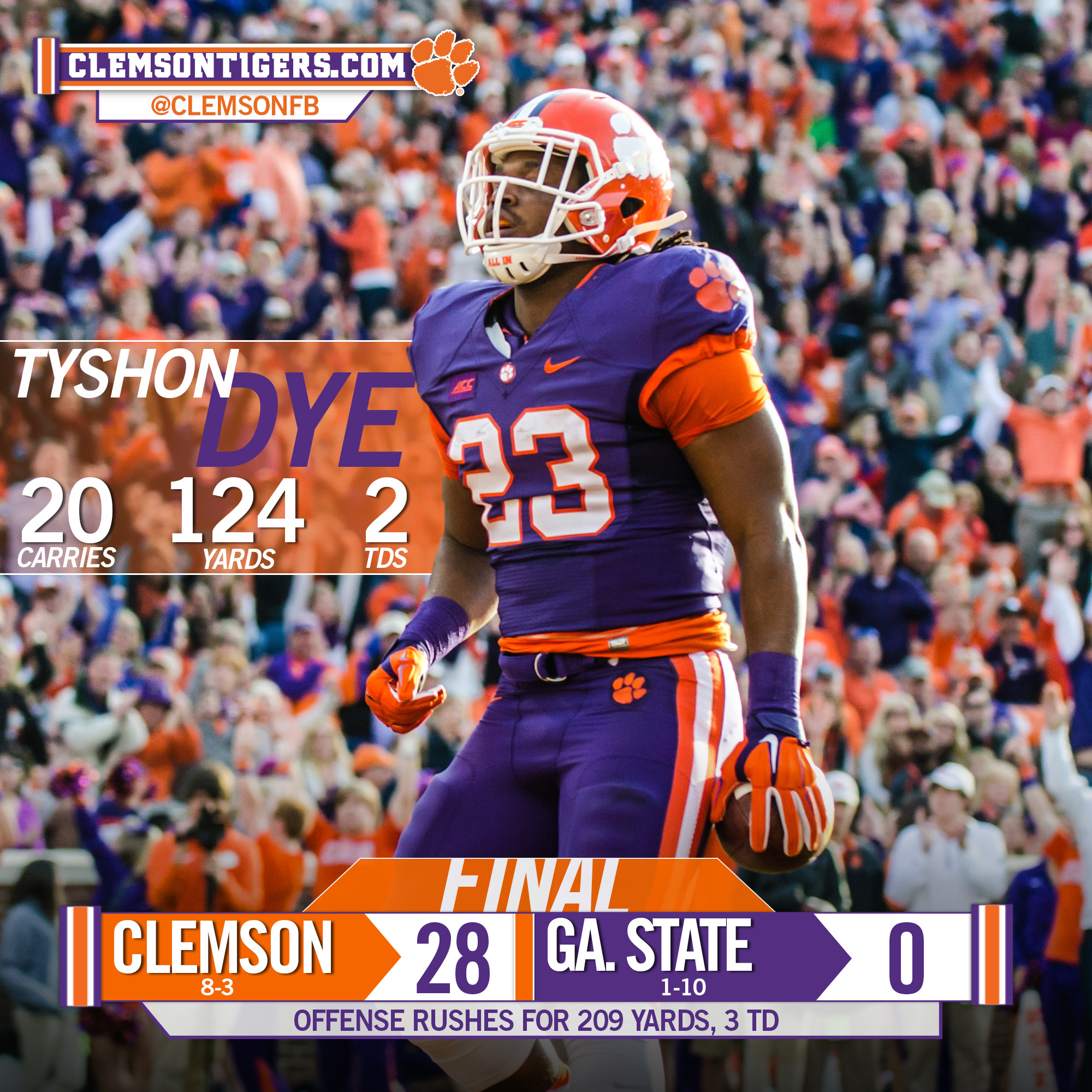 The win marked the Tigers’ eighth straight at home, moving the Tigers to 8-3 overall on the season. Clemson’s defense recorded its second shutout of the season, the first time since 1998 that the Tigers have had multiple shutouts in one year.

Tyshon Dye was the star on offense, as the freshman running back scored twice and rushed for 124 yards, the most by a Clemson running back this season. D.J. Howard had 43 yards on eight carries and Wayne Gallman added 30 rushing yards and a touchdown.

“We were going to make a point to really feature Tyshon Dye,” said Swinney. “You can just see that he has something special. I can see what’s coming down the road for us in the running game. It’s exciting.”

“We ran the ball well today,” said Offensive Coordinator Chad Morris. “It was a good mixup seeing Dye play. He continues to get better each and every week. Our big focus this week is how we could build confidence in our offense, and I think we did a good job of that today.”

On the other side of the ball, Clemson’s defense limited Georgia State to 155 total yards of offense, including just 40 rushing yards. The defense came away with three turnovers on day, with interceptions by Korrin Wiggins, Jayron Kearse and Garry Peters, all of which ended potential Georgia State scoring drives. Vic Beasley, a Lombardi Award finalist, recorded his ninth sack of the year in the third quarter to extend his career total to 30.

The game started slow for the offense, but Dye got things moving when he scored his first career touchdown midway through the first quarter to put the Tigers ahead 7-0, capping a five-play, 30 yard drive.

Dye would get the call again and came through with his second touchdown of the day to give the Tigers a 14-0 lead near the end of the first quarter. The offense punched it in twice more before halftime, with a nine-yard touchdown run by Gallman and a quick strike from Cole Stoudt to Mike Williams to extend the Tigers’ lead to 28-0 at halftime. Stoudt credited the offensive line.

“The offensive line did a great job today,” stated Stoudt. “All of it comes down to our preparation. We put in a great week and a lot of people got their confidence back this week.”

The Tigers return to Death Valley on November 29 for their final home game against South Carolina.

“Today was a special day for our seniors,” added Swinney. “They got their 40th win and tied an all-time record with that 1990 group. And that’d be a special thing if they can break that record next week by beating South Carolina in their final home game. If we can continue to win the turnover battle, we’ll win the game.”