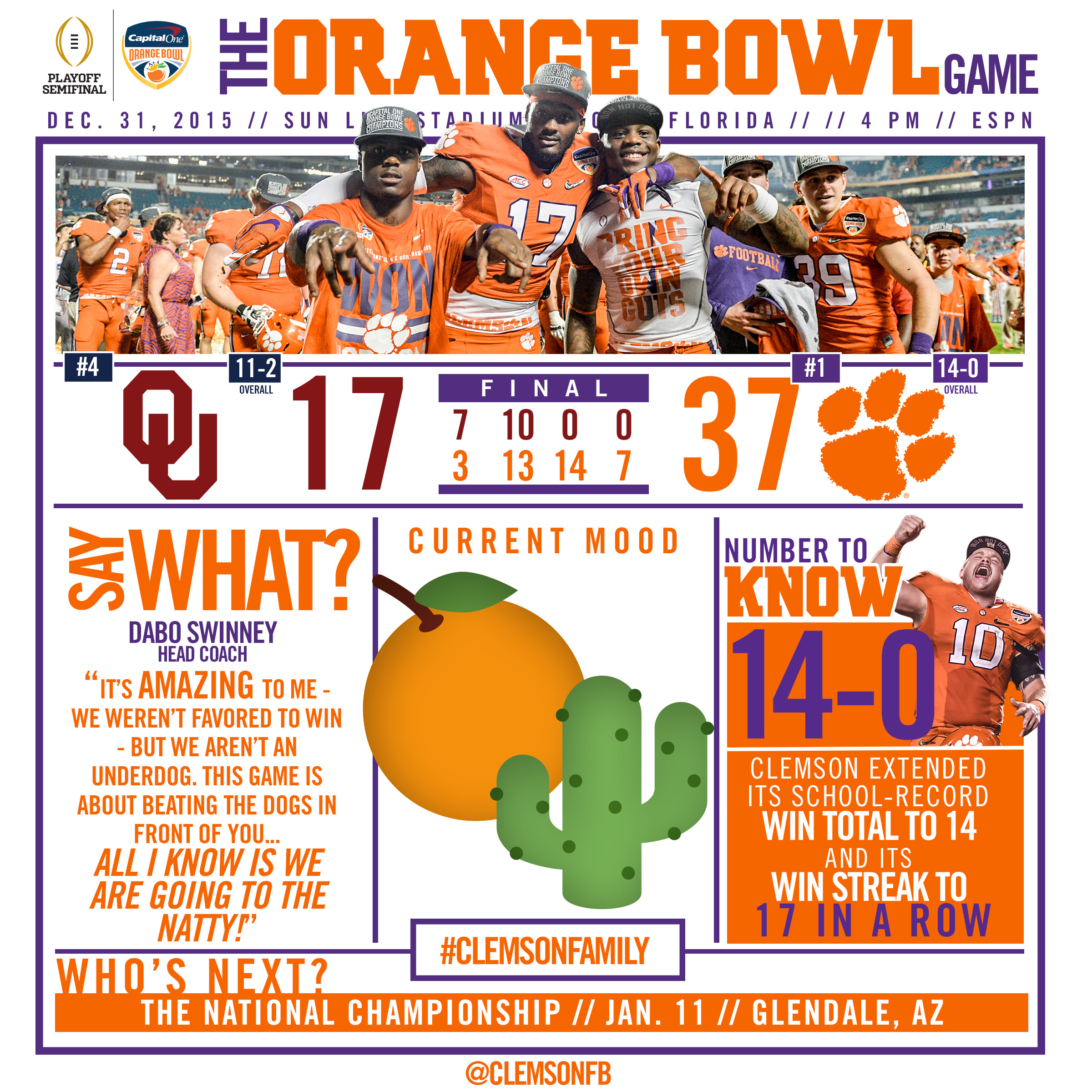 Tigers to Play for National Championship

MIAMI GARDENS, FLA. — A dominant second half on both sides of the ball propelled the No. 1 ranked Clemson Tigers to a 37-17 win over Oklahoma in the Capital One Orange Bowl on Thursday at Sun Life Stadium. With the win, the Tigers advanced to the College Football Playoff National Championship in Glendale, Ariz., on Monday, January 11.

The ground attack of Deshaun Watson and Wayne Gallman once again proved to be a formidable 1-2 punch, and the Tiger defense stiffened in the second half with a performance that evoked memories of the 2014 Russell Athletic Bowl, a 40-6 win over the Sooners. Watson, named the game’s Most Valuable Offensive Player, finished with 24 carries for 145 yards and a touchdown, while Gallman rushed for 150 yards and a score on 26 carries. The Tigers finished with a school bowl-record 312 yards, and held the Sooners to just 67 for the game on the ground.

Looking for a spark early in the second quarter, the Tigers found it in the form of 315-pound freshman defensive tackle Christian Wilkins. A member of Clemson’s punt team all year, he ran down the left sideline and caught a 31-yard pass from punter Andy Teasdall. It was the first reception in Clemson history by a defensive lineman. It led to a Watson rushing touchdown that gave Clemson its first lead at 10-7.

The back and forth second quarter saw OU reclaim a late lead at 17-16 when Baker Mayfield found tight end Mark Andrews for a score. Watson quickly brought Clemson into the redzone after converting a 3rd-and-long, but he forced a pass to Jordan Leggett that was intercepted in the endzone.

The Tigers turned to Gallman on the opening drive after halftime, and the move paid off. His one-yard plunge pushed Clemson ahead again by six at 23-17. Later, with OU moving the ball and threatening in Tiger territory, freshmen Austin Bryant and Kendall Joseph combined to stuff Samaje Perine to thwart a drive. Watson made the Sooners pay, this time hitting Hunter Renfrow on a 35-yard touchdown strike that put Clemson up by a 13-point margin.

Gallman capped a nine-play, 50-yard drive with 10:48 to play with his second touchdown of the contest. Ben Boulware, named the game’s Most Valuable Defensive Player, halted an Oklahoma drive deep in Clemson’s end with an interception to thwart the Sooners’ final scoring try.