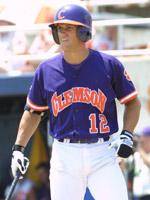 Kyle Frank went 5-for-5 with two homers, both in the second inning, and Brad McCann hit two homers in #15 Clemson’s 20-5 win Sunday at Shipley Field in College Park, MD. Clemson salvaged the series with a season-high six home runs Sunday after the Terrapins won both games Saturday. The win broke Clemson’s four-game conference losing streak, its longest since 1999. Clemson improved to 27-12 overall, 5-7 in the ACC, while Maryland fell to 14-23 overall, 2-12 in conference play.

Kyle Frank got the scoring started when he led off the second inning with an opposite-field homer to left field, his fourth home run of the season. After Brad McCann, who had struck out in his first at bat, golfed an 0-1 curveball well over the left-field fence for a three-run homer. Frank made it back-to-back homers with his second homer of the inning, a long home run, this time to right-center.

Frank, who now has five homers on the season, hit two homers in a single game earlier in the season. He also was just the third Tiger to hit two long balls in the same inning in Clemson history. Chuck Baldwin (1986) and Brooks Shumake (1982) were the other two Tigers to hit two homers in the same inning, both times in the first inning and both against the Terrapins. Frank, a fifth-year senior from Wolfeboro, NH, entered the game with eight homers in 719 career at bats. Frank was 5-for-5 with two homers, a double, two singles, a walk, four RBIs, four runs scored, and a stolen base in the game. It was also his first career five-hit game.

Maryland responded in the bottom of the second. Will Frazier led off with a single to left-center and freshman Brian Jarosinski followed with a home run to left field, the first of his career.

Maryland again threatened in the third inning. Mike Costantino led off with a single to right, followed by a double off the right-field wall. Ray Gemmill loaded the bases with no outs when he was hit by a pitch to the helmet. But Jackson came through for the Tigers, something Clemson pitchers had not done in the first two games of the series. He got Justin Maxwell to line out to right field and Frazier to ground into a 1-2-3 inning-ending double play, keeping Maryland off the scoreboard in the inning.

In Frank’s third at bat (in the fourth inning), he lined a 3-1 pitch to the right-field gap for a double to plate two more runs. Johnson had earlier doubled with two outs followed by a McCann walk. Hourigan followed up with another double off the left-center wall to plate Frank and give Clemson an 11-2 lead. Clemson, who had just 11 extra-base hits during its six-game slump (1-5 record), had eight extra-base hits (three homers, five doubles) in the first four innings and 12 (six homers, six doubles) in the game Sunday.

Maryland continued the scoring in the bottom of the fourth inning. Bobby Ryan had a one-out walk and reached third on Kyle George’s single up the middle on an 0-2 count. Ryan reached second on Frank’s throw to third base, as George scored on McCann’s errant throw to second in attempt to get Ryan. Two batters later, Costantino doubled down the right-field line to plate George.

The Tigers’ two-out success continued in the fifth inning. Herman Demmink lined his fourth hit of the game with two outs, then Russell Triplett brought Demmink home with a double down the left-field line. Demmink’s four hits were a career high.

The trend of the Terrapins scoring every inning the Tigers scored was in effect again in the the fifth. Frazier hit a one-out double off the right-field wall and Jarosinski followed with an RBI single through the left side.

Clemson added five insurance runs in the eighth inning. Frank led off with his fourth hit of the game, a single through the left side. After pinch-hitter Ryan Hub walked, Slevin hit a one-out single to left to score Frank. After Collin Mahoney walked, pinch-hitter Garrick Evans lined a sacrifice fly to center, plating Hub. Triplett then followed with a three-run homer to left-center to give Clemson a 17-5 lead.

McCann hit a towering home run to lead off the ninth inning, his second of the game and seventh of the year. Later in the inning, Slevin hit a long two-run homer to left-center to give Clemson a 20-5 lead. Slevin was 4-fo-6 with a team-high five RBIs in the contest.

Clemson will travel to Athens, GA Tuesday to take on Georgia. First pitch is scheduled for 7:00 PM at Foley Field.