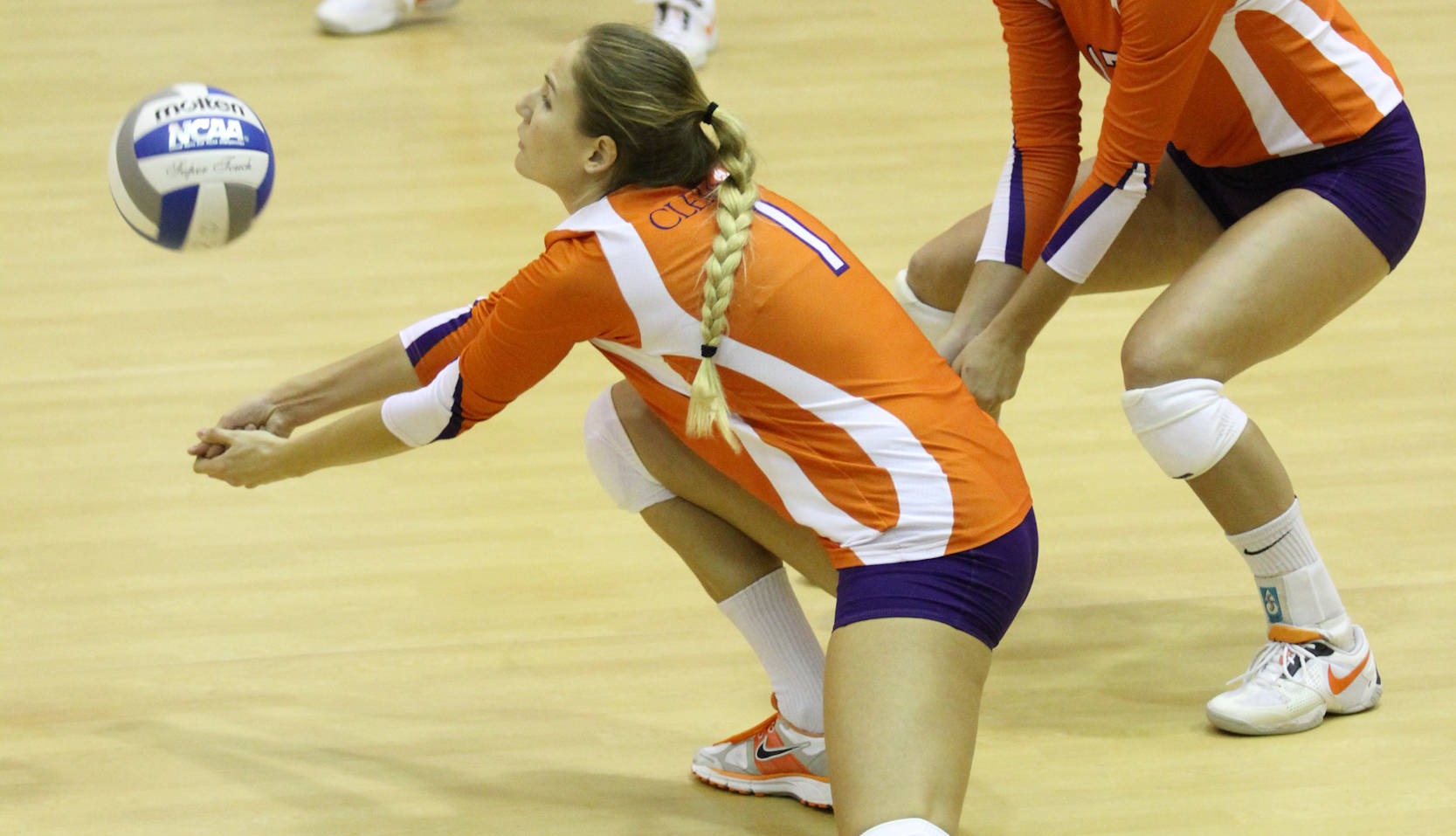 Hannah Brenner keyed Clemson’s offense with a season-best 51 assists as the Tigers hit .265 in the match, while holding the Terps to a .209 mark. Mo Simmons led Clemson with 19 kills, while Serenat Yaz had 17 and Sandra Adeleye added 13 of her own.

The Tigers overcame 28 kills from Maryland sophomore Ashleigh Crutcher en route to the five-set victory. The win made it a weekend sweep, as the Tigers won at BC on Friday before taking down Maryland. Clemson has two more on the road next weekend at Virginia and Virginia Tech before playing their final five matches of the season at home.

Simmons’ 19 kills tied a career high for the junior, and tied a team season-high for Clemson. Her 24.5 points was the top mark for any Clemson player this season as well, as she registered three aces, and three total blocks. She also tallied 13 digs for her second straight double-double, and the sixth of this season.

Yaz’s 17 kills were a season high for the senior, who hit .366 and tallied 14 digs for the 35th double-double of her career.

Adeleye had 13 kills, but also impacted the match defensively, where she had a team-best eight blocks. Natalie Patzin had a match-high 24 digs for the Tigers, who had 75 in the match. Clemson also had 14.0 total blocks, with Rand and Simmons pitching in with four apiece.

Clemson hit .500 in the final set with no attack errors, with Brenner putting down two of them. The Tigers opened a 10-3 lead behind two kills each from Simmons and Yaz, forcing a Maryland timeout. Maryland scored five of the next six points to pull within three at 11-8 on the back of three Crutcher kills.

Brenner then put the next ball away to spark a run. Crutcher sent her attack long, and after a side-out, committed a service error to set up match point for the Tigers. Alexa Rand and Simmons combined on the block to put the match away.

The Tigers dropped a close first set, 27-25 as Maryland hit .349 behind eight kills from Crutcher. Clemson fought off three set points at 24-21 to tie it up, but couldn’t take a lead. In the second set, Brenner guided Clemson’s offense to .444 hitting, as the passing was solid, leading to Clemson siding out on 16 of 17 opportunities on their way to the 25-17 win.

The defense stepped up in the third set, tallying five blocks and holding Maryland to .154 hitting, as Clemson had 19 digs to just nine for the Terrapins. The Tigers entered the fourth set with a 2-1 lead, but it was Maryland that struck first, taking a 10-6 lead after seven straight points. Clemson then scored eight of the next ten to take back the lead, 14-12.

After a Maryland timeout, the Terps scored five of the next six points to take a 17-15 lead. Clemson knotted it, but Maryland again pushed out in front to set up set point. Clemson fought off two, but a block sealed it to send the match to five.