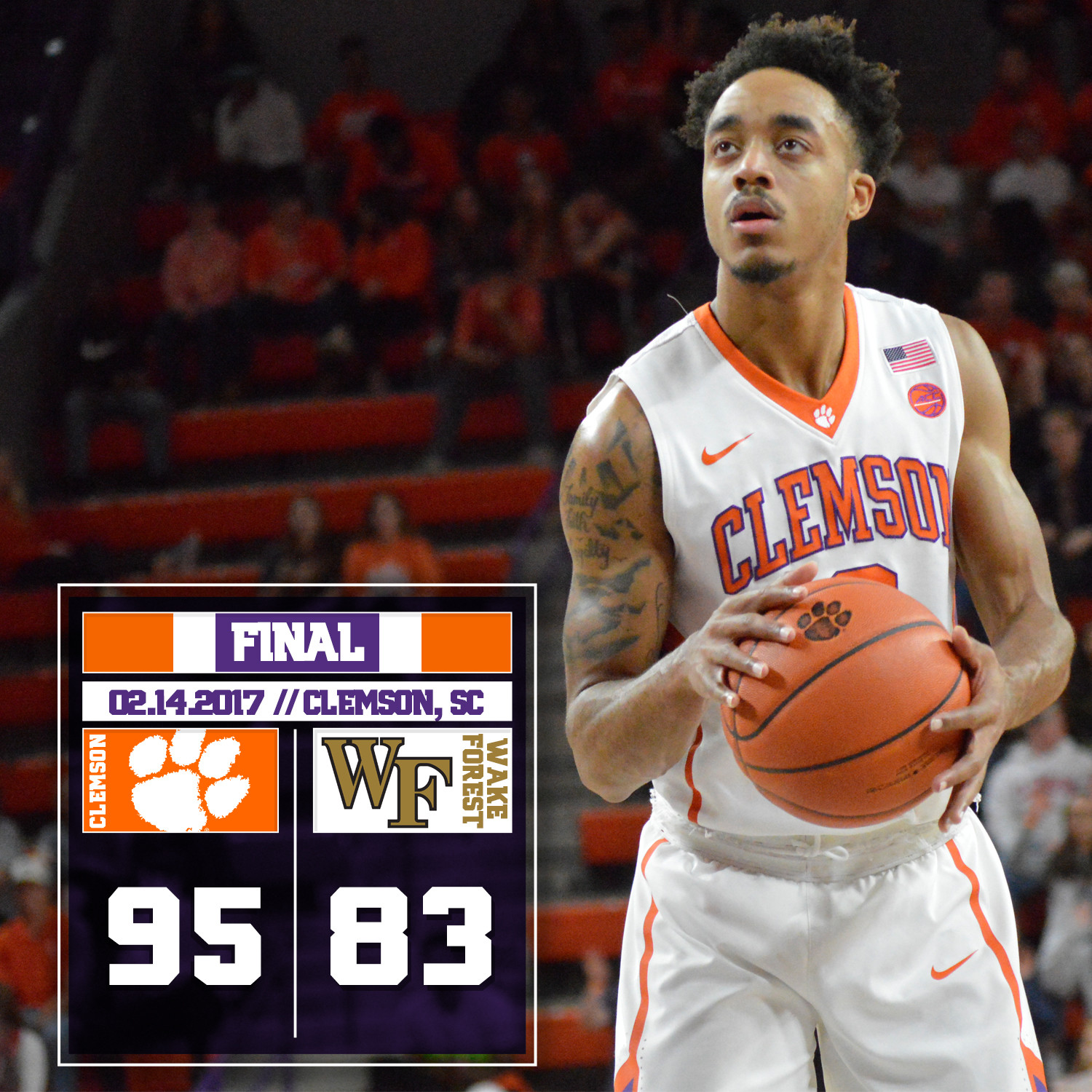 CLEMSON, S.C. — A hot-shooting first half sparked Clemson to its highest point total in ACC play under head coach Brad Brownell in a 95-83 win over Wake Forest on Tuesday. The win improved the Tigers to 14-11 on the season, 4-9 in league play. Wake fell to 15-11 overall, 6-8 in the ACC.

Clemson’s 95 points were the most in an ACC game since 2007-08, and most in regulation in over 10 years. The Tigers shot 51 percent for the game and moved to 18-4 at home on Valentine’s Day, the winningest calendar date in program history.

Marcquise Reed victimized Wake Forest for a second time, scoring 21 points just as he did in the first meeting on New Year’s Eve. Reed hit 5-10 shots and 9-10 at the free throw line in 32 minutes. He was one of four Tigers in double figures. Jaron Blossomgame added a double-double (17 points, 10 rebounds), while Avry Holmes and Shelton Mitchell added 15 apiece. John Collins had a monster game for the Demon Deacons with 29 points and 10 rebounds.

Clemson built a 27-21 lead just over the midway point of an up-and-down first half. After Wake cut the deficit to just one point, the Tigers ended the half on a 17-6 run that spanned over seven minutes of game clock. It was highlighted by a nifty assist from Donte Grantham to reserve center Legend Robertin, who converted the alley-oop to lift the coliseum crowd to its collective feet.

Clemson’s lead ballooned to as much as 21 on a three-point goal from Holmes, one of three triples on the night for the Tiger senior. After Wake whittled the lead to 14, Reed scored on a fastbreak opportunity and converted the free throw to push Clemson back ahead 65-48. Wake cut into it even more, pushing it relentlessly inside to Collins. His fastbreak layup cut the lead to single digits for the first time in the half, 76-67, with 5:40 to play. But Blossomgame scored a bucket in the paint and Reed delivered another three-point play, giving the Tigers an 81-69 edge. Clemson hit 83 percent of its free throws in the second half to ice the win.

The Tigers hit the road for their final two ACC away games, first against Miami on Saturday. The Tigers and Hurricanes square off in the BankUnited Center at 12 p.m.

Postgame QuotesClemson Head Coach Brad BrownellOpening statement:“This was a good win for our guys. I thought we played well tonight in a lot of areas. Defensively, in the first half, I thought we were pretty good. The first eight minutes, maybe not as good as we would’ve liked, but the last 12, we did a lot of really good things. We played pretty well offensively. Maybe had a little bit of an offensive drought there in the second half. It’s harder playing with a lead like that sometimes. I think the other team can be aggressive and attack you, and there’s not nearly as much pressure to shoot. Wake really played well in the second half; they were hard to guard. I’m really proud of Legend (Robertin) for giving us some good minutes off the bench. I thought he really gave us a spark. And, again, I’m just really happy for my team. My team has been competing really hard the last couple of weeks, especially last week. We didn’t get any wins, so it’s nice for my team to enjoy a win tonight. I thought we had a lot of guys play well, so it was a good team victory. ”On how his team responded following multiple close losses:“There have been no signs in practice that our guys aren’t still competing and working hard and trying to hang it there, but I think it speaks to the character of our guys. It’s harder than people realize. You pour so much into every game. For 48 or 72 hours, you’re getting prepped on a team, and, then, play your guts out and lose on a last-second shot or miss a shot to win a game. There’s an emotional toll that plays over the course of a long season, and there’s no question that it can drain you physically, as well. Emotionally, it’s hard to keep your battery recharged. It helps up to have depth. That gives your team energy, so I think that really has helped us.”On Legend Robertin’s contributions:“Defensively, he does okay, and I thought he did fine tonight. I thought, offensively, he made a couple of nice catches and finished some plays that were really good for us.”On Marcquise Reed’s great performance:“(Marcquise) Reed played well. I thought there were some good open-court situations for him. He’s just becoming more confident and comfortable out there. He’s been coming on the longer the season’s been  ongone. I think he’s more comfortable with how we do things. He’s also becoming much better defensively. He’s really improved. There’s a confidence with him that’s been good to see.”Wake Forest Head Coach Danny ManningOpening statement:“I though in today’s game, Clemson came out and played a really good first half. They delivered the first blow and got up big on us. We kind of regrouped at halftime and came out and put up a much better effort and battled. That hole that we dug for ourselves in the first half was just too much to overcome.”On Clemson’s defense:“Obviously, when you win the ballgame, you’re doing something right. You look at the box scores, and both teams shot 50 percent, and knowing Brad [Brownell] the way that I do, and knowing me, that’s way too high of a percentage for both of us.”On what made Clemson difficult to defend:“We didn’t stay in front of the ball. We didn’t do a good job of staying in front of the ball, and they forced rotations and were able to move the ball around and make shots.”On Wake Forest’s 18 turnovers:“We didn’t handle the ball well. Some of the turnovers were when the ball hits us in the hands and we don’t secure the possession. Some of them, you’re trying to make a great pass…the hero pass. But you’re right, 18 turnovers is far too many.”