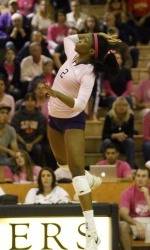 The Tigers return to action on Saturday at 5:00 pm as they welcome in the Wake Forest Demon Deacons, who suffered a three-set loss to Georgia Tech on Friday.

Clemson played outstanding ball both ways, registering 14.5 blocks on the Blue Devils and holding them to .163 hitting, and snapping Duke’s six-match win streak entering the match.

“We did such a good job handling the ball tonight,” said Jolene Jordan Hoover, who won her 393rd match as Clemson’s coach. “Hannah was able to get the ball to the middle which allowed Sandra to have the night that she had. We played really great defense tonight.”

Sandra Adeleye reminded everyone why she’s a two-time All-ACC selection, blasting 19 kills and hitting .576 to go along with three blocks. Alexa Rand, making a push for her first All-ACC honor, piled up 11 total blocks, giving her 21 against them in the last two matches against Duke. It continued a streak for Rand, who also registered a school-record 15 blocks in a match last season. Rand also added in eight kills for good measure. She passed assistant coach Kelsey Murphy for eighth on the all-time Clemson blocking list, finishing the night with 449 career rejections.

Hannah Brenner looked comfortable running the offense, dishing out 41 assists, tallying eight digs, four kills, and a pair of blocks. Clemson’s 52 kills were by far the most in three sets this season, as well as in assists and blocks.

Serenat Yaz acted as the team’s closer, picking up three key kills down the stretch en route to a 13 kill – 9 dig evening, to go along with three blocks and a .294 hitting percentage. Six of her kills came in the final set, when the Tigers tallied 19 kills in the frame.

In two matches this season, Clemson has 32.5 blocks on the Devils, more than four per set.

The Tigers spread them out evenly in this one, going for four in the first, six in the second, and 4.5 in the third.

Duke Christiana Gray had a very good night in the middle, nailing 18 kills against just two errors. But, her second error proved to be her costliest, as her final swing sailed long to clinch the match for the Tigers.

In their previous meeting this season on Sept. 24, the teams played to five sets, with the deciding one the second-longest in NCAA history. That match went nearly three hours, while the Tigers cruised Friday in a crisp, 1:32.

The Tigers shook off a 14-9 deficit in the first set with a big, 16-5 run to close the set and win 25-19. Clemson held Duke to .042 hitting in the set behind four blocks. Adeleye paced all players with 5 kills. Three straight blocks got the Tigers back in business, and then the offense took over, notching eight kills on Clemson’s final ten points.

Clemson took an early lead in the second set on a pair of solo blocks from Rand before stretching the lead to four at 16-11. The Tigers got up by a wide margin, 23-14 before the Blue Devils picked up the intensity, rattling off eight of the next nine and fighting off five straight set points to pull within one at 24-23, before Rand dumped an overpass to clinch the set for the Tigers, 25-23. Clemson hit .347 in the set, and Adeleye had a stunning nine kills in 12 swingsas the team had 18 kills and just one error.

The scare in the second set seemed to wake Clemson up in the third set, as they got out to an early 13-6 lead behind four kills from rand and three team blocks. Duke then embarked on a 7-1 run to pull within one at 15-14, but Adeleye posted two more kills and Brenner found the floor for one of her own to give the Tigers some breathing room. Clemson stretched it to five at 21-16, but the Blue Devils scored four straight to get within one again. That’s when Clemson went to Yaz, who had three kills in the final four points. The Tigers won when Gray’s attack sailed long.