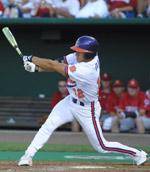 The first five batters in the Clemson order combined for 14 hits and Tyler Lumsden pitched seven strong innings to earn his sixth straight win in the Tigers 9-4 victory over Virginia Friday night at Kingsmore Stadium. The Tigers improved to 22-6 overall, 2-2 in the ACC, while Virginia fell to 19-9 overall 5-4 in the ACC. The same two teams meet Saturday afternoon at 4:00 PM at Kingsmore Stadium.

The victory by the 15th ranked Tigers ended a 10-game winning streak for Virginia. Clemson improved to 39-4 lifetime against Virginia at Doug Kingsmore Stadium, including a 12-1 mark under Jack Leggett. Leggett is now 26-6 all-time as Clemson coach against the Cavaliers.

Lumsden went seven innings and allowed just five hits and three runs. Four of the five hits he gave up were infield hits. He struck out five and walked just two as he held a Virginia lineup that entered the game with seven batters hitting at least .300 and a team average of .319. He improved to 6-0 for the season and kept his ERA under 2.0.

Clemson wasted little time in taking a 5-0 lead in the bottom of the first. Russell Triplett and scored when Michael Johnson doubled to right field.

Brad McCann, who leads the Tigers in RBIs for the season, then tripled up the alley in right center to score Triplett and Johnson. Frank then followed with a single to score McCann with the fourth run of the inning. One out later freshman Herman Demmink singled to score Frank, who had advanced on a balk and a ground out.

Virginia scored its first run of the night in the top of the third. Scott Headd and Kyle Werman had consecutive infield singles to the right side to open the inning. A wild pitch moved both runners up a base. One out later Matt Dunn hit a sacrifice fly to score Headd.

Clemson added a pair of runs in the fifth and Virginia countered with a pair in the sixth. Reynolds provided the key hit with a two-run homer, his fifth of the season and 20th of his career. The Cavs scored one run in the top of the ninth on a single by Sweet, a walk, a fly ball and a sacrifice fly by Werman.

Freshman Kris Harvey finished up the last two innings for Lumsden. Harvey struck out four of the eight batters he faced.