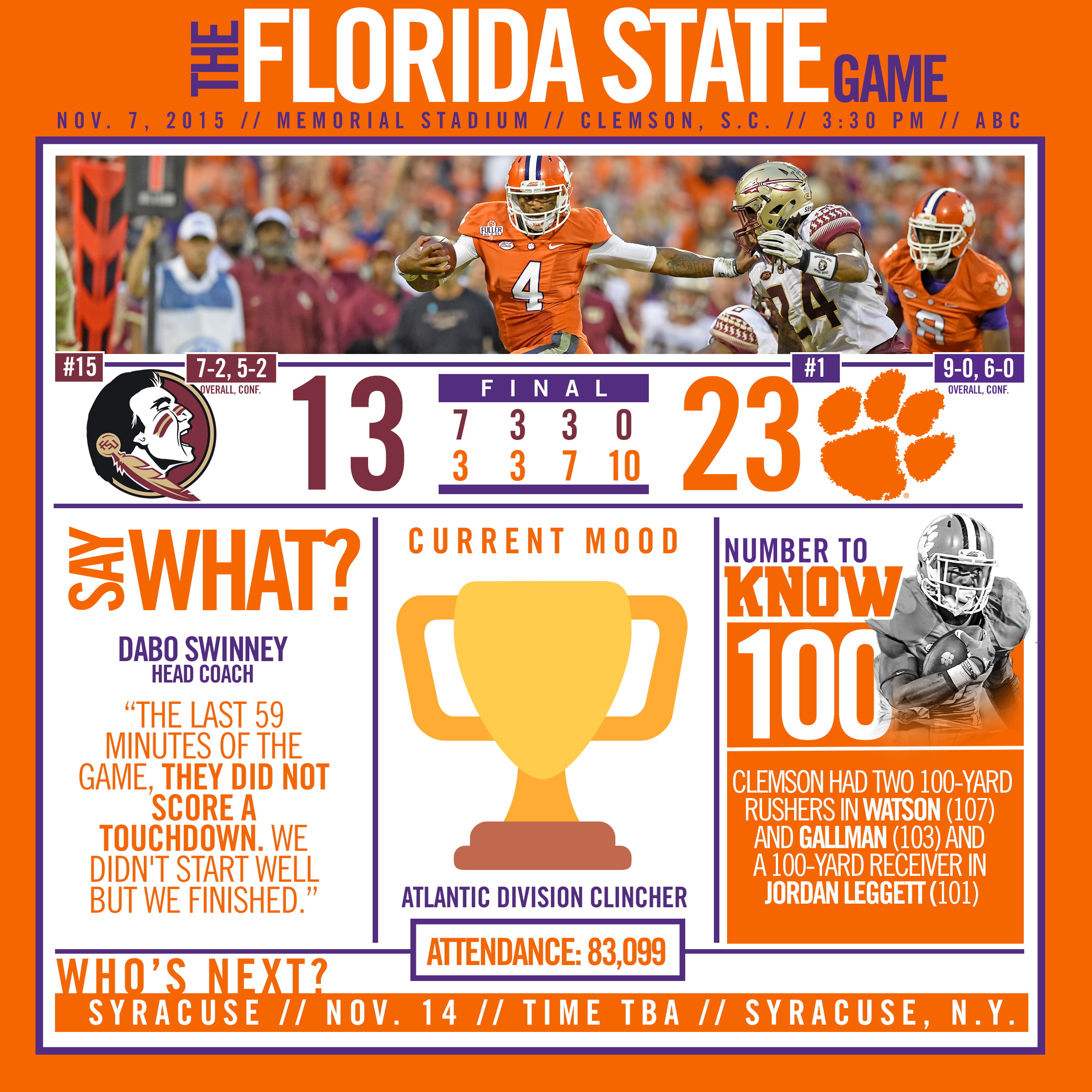 CLEMSON, S.C. – The top-ranked Clemson Tigers overcame a first-half deficit to defeat No. 15 Florida State 23-13 in front of a deafening crowd of 83,099 fans at Memorial Stadium on Saturday afternoon. Clemson overcame its first halftime deficit since 2014 to capture the ACC Atlantic Division title for the first time since 2011 and improved to 9-0 on the season.

“We had help from all phases tonight,” said Clemson head coach Dabo Swinney. “When we had mistakes, we picked each other up. There was no panic. There was some frustration in the first half, but the will to win and the fight was there.

A low-scoring first half left the Tigers looking for a change in fortune heading into the second half. The offense got what they were looking for early in the third quarter with a touchdown pass from Deshaun Watson to Deon Cain to put the Tigers on top 13-10.

Watson set a career high in both completions (28) and passing attempts (42), as well as a career high with 107 rushing yards. Watson’s 107 yards on the ground also marked the first time a Tiger quarterback had 100+ rushing yards since Tajh Boyd ran for 127 yards versus Ohio State in the Orange Bowl on Jan. 3, 2014 (Clemson 40-35).

The Tiger defense came out to make a statement after halftime adjustments, forcing two turnovers and one sack. Their efforts allowed the offense to come in and capitalize, pulling away from a 13-13 tie score thanks to Greg Huegel’s third field goal of the game with 7:23 left in the fourth quarter.

In a crucial moment, Ben Boulware and Shaq Lawson made a stop on fourth-and-one, allowing the offense to take over on the Seminole 40. Watson then made crucial plays on consecutive third downs with completions to Charone Peake, who converted both for first downs. The offense capped off their drive with a 25-yard rushing touchdown by Wayne Gallman.

Boulware and B.J. Goodson worked together to cause a turnover late in the fourth quarter to give the Tiger offense possession. The offense eventually took a knee and sealed their victory.

The Tigers’ next contest is next Saturday at Syracuse. Kickoff time is set for 3:30 p.m. in the Carrier Dome.