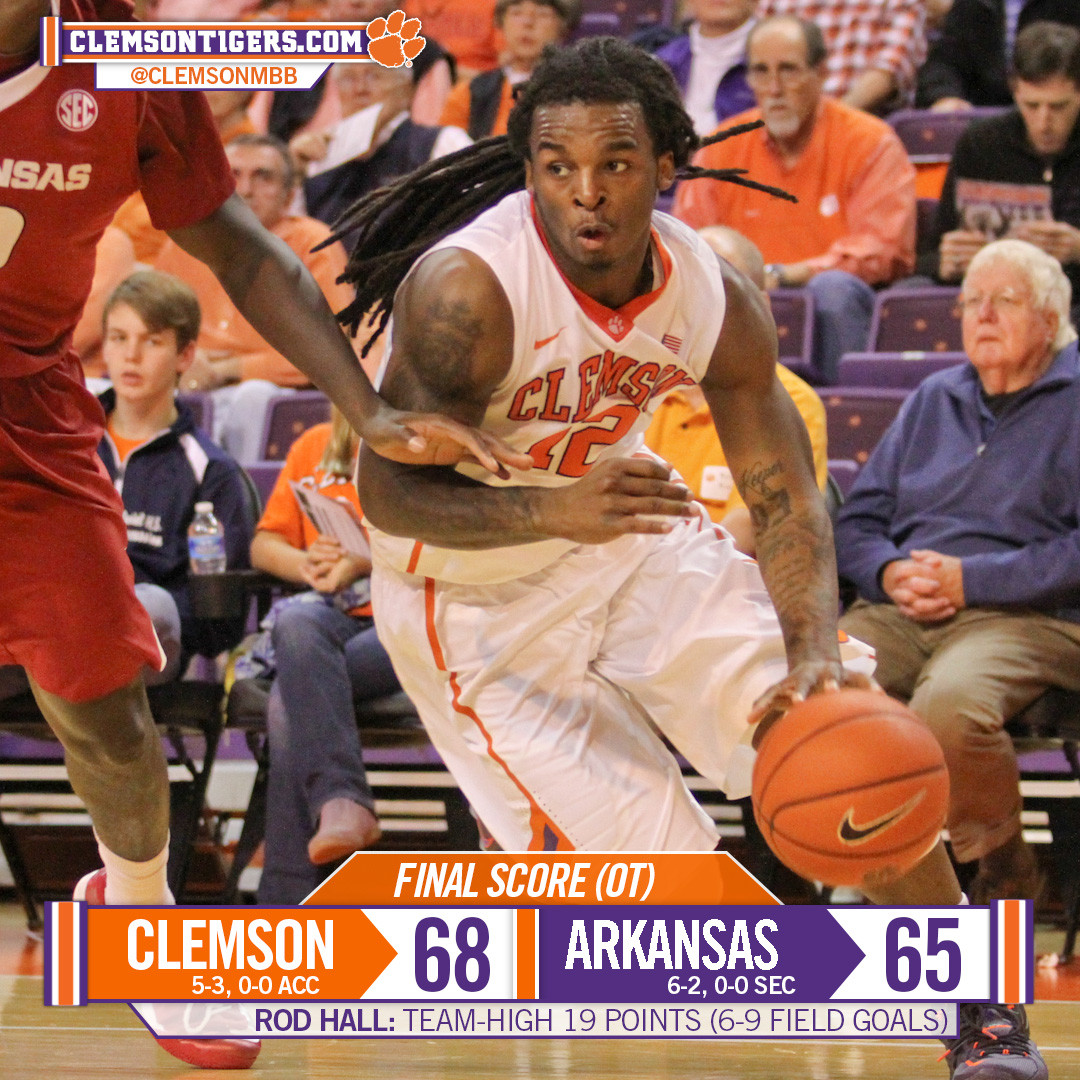 CLEMSON, S.C. — Down six with less than a minute to play, Clemson scored the game’s final six points to force overtime and eventually pulled away for a 68-65 win over No. 18 ranked Arkansas on Sunday. The win improved the Tigers to 5-3 on the season, while dropping the Razorbacks to 6-2 overall.

“This was a big win for our program,” said Head Coach Brad Brownell. “It’s hard to schedule these types of games. I wasn’t real happy after the Rutgers game, but our guys really came out and competed hard today.”

Rod Hall scored 19 points to pace the Tigers, including 12 in the final eight minutes of the game. Jaron Blossomgame added 17 and produced the game-tying layup off a Tiger steal with 7.9 seconds remaining. Donte Grantham contributed 14 points. Michael Qualls (21) and Bobby Portis (18) led the way for the Razorbacks, who have lost two straight.

Both teams came out on fire, combining for 10 makes over the first 20 attempts of the game that put Clemson ahead 12-10 before the first media timeout. The Tigers kept up their fast pace offensively and surged ahead by as much as nine at 29-20, before the Hogs closed the gap to 29-25 at halftime behind five straight points from Qualls.

Clemson still led by five at 36-31 when Arkansas took off on a 14-2 run that lasted over six minutes. The eight-point cushion diminished to two at 52-50, but the Hogs built it back up to 57-51 after a Portis layup with 77 seconds left. That set up Clemson’s improbable final minute, featuring two steals and two conversions, including the game-tying lob to Blossomgame.

Hall set a tone in overtime with a three from straight away, and Clemson never trailed in the extra session.

The Tigers break for final exams and return to action Sunday, Dec. 14 against Auburn. The game is general admission seating for fans and will tip off at 4 p.m. in Littlejohn Coliseum.