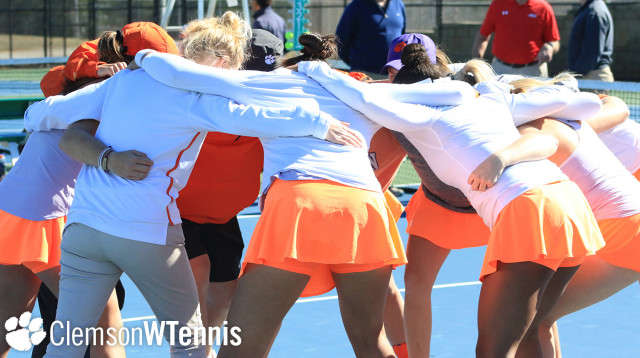 Tigers Overpowered by No. 3 Duke Sunday in Durham

DURHAM, N.C. – The Clemson women’s tennis team fell to third-ranked Duke, whose lineup featured two top-seven-ranked doubles teams and five singles players ranked in the top 85 nationally, 7-0 on Sunday afternoon at Ambler Tennis Stadium in Durham, N.C. With the loss, the Tigers fell to 11-10 (4-6 ACC), while the Blue Devils improved to 17-2 (9-1 ACC).

The Blue Devils won the doubles point with victories at No. 3 and 2, in that order. At No. 1 doubles, Marie-Alexandre Leduc and Fernanda Navarro, ranked 44th nationally, were leading the Blue Devils’ fifth-ranked duo of Kelly Chen and Samantha Harris 6-5 when play was abandoned.

Duke won five of the six singles matches in straight sets. Clemson sophomore Tate Schroeder won the first set over 26th-ranked Chen, but Chen rebounded with a 6-2 win in the second, forcing a 10-point super tiebreak. Schroeder battled back and forth with Chen, but the Blue Devil ultimately took the tiebreak, 10-8.

Clemson returns to action on Friday, April 13 when it hosts Louisville at 12 p.m. at the AU Tennis Facility in Anderson, S.C. On Sunday, April 15, the Tigers host North Carolina, the nation’s number-one team, at 12 p.m. in Anderson.