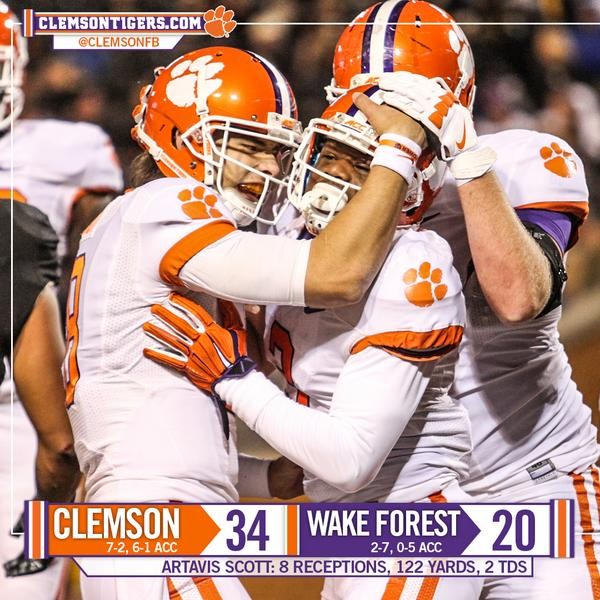 WINSTON-SALEM, N.C. — The 19th-ranked Clemson Tigers overcame a slow start but finished fast in a 34-20 triumph at Wake Forest on Thursday. The win, Clemson’s sixth straight on the season, moved the Tigers to 7-2 overall and 6-1 in the ACC. The loss dropped the Demon Deacons to 2-7 overall, 0-5 in league play.

Clemson compiled 427 yards of total offense and limited Wake to just 119. With the effort, the Tigers moved atop the national rankings in total defense. The Deacons were held to just seven yards on the ground, while the Tigers racked up 13 tackles for loss.

“Early there was way too much frustration instead of accountability,” said defensive coordinator Brent Venables. “I think our experience and leadership took over. We had poise in the second half and got into a rhythm.”

The teams were tied early in the fourth quarter but the turning point in the game came when freshman Artavis Scott caught a flip from Cole Stoudt on an end around and evaded tacklers to score the game-winning touchdown on a 68-yard “catch.” The highlight play helped spark the offense and the Tigers pulled away in the final 10 minutes.

“It’s amazing what happens when one guy makes a play and everyone starts believing,” said offensive coordinator Chad Morris.

Offensively, Stoudt threw for 282 yards and three touchdowns in the win. Freshmen Wayne Gallman and Scott were the standout performers for the offense. The two accounted for all four of the Tiger touchdowns, with Gallman posting 149 yards from scrimmage. Scott grabbed eight balls for 122 yards and two scores.

Morris credited the Clemson fans in attendance for having a big impact on the game. “We had unbelievable fans tonight. Our fans were incredible. They were everywhere hollering and cheering. We really appreciate that. Hats off to our fan base. It doesn’t matter where we go, our fans travel and we love them for that.”

“It’s a tough place to play but our fans gave us an edge,” said Stoudt. “That was probably the best our offensive line has played. They were a huge factor in this game.”

Wake Forest went up 7-0 early, but Clemson responded with an Ammon Lakip field goal and screen pass for a touchdown to Wayne Gallman to take the lead in the second quarter. The Tigers were up 17-14 on the final drive of the half, when a defensive penalty on Clemson gave Wake Forest a chance to tie it on an untimed down. Mike Weaver was true from 50 yards out to knot the game after 30 minutes.

“When it counted, we got it done,” said senior Grady Jarrett. “It was a complete team effort on this win. I felt like we were flat at the beginning of the game. But we fixed it. If we want to be the defense we want to be, we have to get better week in and week out.”

The Tigers return to the road to take on a top-25 Georgia Tech team on Saturday, Nov. 15. Kickoff will be either 12 noon or 3:30 p.m. and the game will be televised by ABC or ESPN.