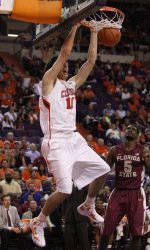 Clemson used 18 points from Andre Young and 15 points from Milton Jennings to beat Florida State 79-59 to open the Atlantic Coast Conference part of its schedule. Thanks to outstanding hustle, which led to a 20-0 first half run, the Tigers were never in any real serious danger to lose the game.

Ian Miller led the Seminoles with 16 points, while Bernard James had 10 points. Clemson improves to 9-6 overall and 1-0 in the ACC, while the Seminoles fall to 9-6 and 0-1 in the ACC.

“I thought we had a great week of practice and the players were really locked in and focused,” Brownell said. “We made a lot of tough plays today.”

The Tigers did, especially on defense where at one point in the first half they made 11 straight stops.

“Twice we stopped them 11 times in a row. We’re going hard in both halves. We all went hard. We didn’t want to lose.”

That was obvious from the beginning as Clemson took the lead, 6-3, on a Young three-pointer from the wing and never allowed the Seminoles to tie or take the lead the rest of the night. In fact, the Tigers took a 10-3 lead early on and saw FSU creep back within two at 12-10 before a 20-0 run blew the game open.

During the 20-0 run, Florida State turned the ball over four times and missed eight straight shots. While the Seminoles struggled on offense, Clemson flourished. Catalin Baciu (7-foot-2) scored seven of his nine points during the run as he helped give Clemson a big presence inside to counter FSU’s Xavier Gibson (6-foot-11) and James (6-foot-10).

“He was tremendous,” Brownell said. “He is a big kid and when he is comfortable and is locked in he can be a problem for people, especially when we have them spread out a little bit. I thought our guys did a phenomenal job leading him to the basket.

“Certainly, his size can be a factor and when he is locked in and not nervous and is competitive, he is a guy that can be productive for us.”

As usual Young was very productive for the Tigers as he used his 18 points to go over 1,000 points in his career. He also made his 200th career three-pointer in the contest. But the biggest number that the senior guard put up Saturday was his 12 free throw attempts – a career high. He made 10 of those free throws.

“Coach emphasized us really pushing the ball on makes and misses,” Young said. “They really take pride in their rebounding so they crash a lot and bring a lot of guys down so it was kind of hard for them to get back so we got a lot of fastbreak points and we did a lot of good things in transition.”

Clemson outscored the Seminoles 12-0 in fastbreak opportunities and 38-26 overall in the paint.

“Part of it is the way the game was played and the way they defended,” Brownell said. “It shows (Young’s) improvement as a player though, to be able to put the ball on the floor and create more. That’s not something he’s done as much throughout his career.

“We worked really hard with him this spring, and he did a great job this spring and summer working on his skills. That has helped him attack the basket.”

Clemson finished the game shooting 49.0 percent from the field, while holding the Seminoles to 35.5 percent shooting. Besides Young’s 18 and Jennings 15, Tanner Smith dropped in 13 points to go with his five boards, while freshman guard Rod Hall added 11 points and had four assists.

It was quite the performance especially considering Florida State came in yielding just 60.6 points and 35.6 percent shooting per game.

“That is good for our psyche,” Jennings said. “They are one of the top teams in the country defensively.”

Clemson will hit the road Thursday night as it will visit Boston College for a 7:00 PM tip. The game will be televised by ESPN2.