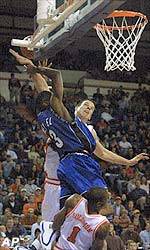 Darius Lane, Seton Hall’s only senior starter, led the Pirates (2-0) with 29 points and a had a career-best seven 3-pointers. Griffin had 22 points and 13 rebounds, and Barrett scored 12 points.

Clemson (1-1) had rushed back from a 70-59 deficit to lead 76-74 on Will Solomon’s basket. But Griffin scored the next four points as Seton Hall regained the lead.

Clemson’s Dustin Braddick tied it at 78 with 1:53 left, setting up a wild finish at Littlejohn Coliseum.

Solomon was called for a charge and lost the ball on the next possession when he ran into several defenders including Griffin.

Barrett drove the lane in the final seconds, drawing a foul from Clemson’s Tony Stockman. Barrett hit the first foul shot and, after missing the second, Griffin was right there when Clemson’s Ed Scott tried to get off the game-winning shot.

Solomon had 24 of his game-high 31 points in the second half.

Lane was the story for most of the game, scoring 17 points in the first half and hitting almost every big shot until Clemson’s comeback.

As Lane’s last 3-pointer, from well beyond NBA range, swished through, he skipped down the court and waved to the crowd.

Both teams looked ragged in the opening half. Seton Hall scored only 15 points in the first 14 minutes. Clemson’s Solomon, the Atlantic Coast Conference’s leading scorer, picked up two fouls and did not play the last 9:36.

But it looked like the Tigers would survive with a 7-0 run after Solomon went to the bench and led 24-15. But the Pirates, behind the veteran Lane, made the Tigers pay with a 22-5 run the rest of the way.

Lane closed it with a 3-pointer to send the Pirates to the locker room with a 37-29 lead.

Griffin added 10 points and nine rebounds in the opening half.