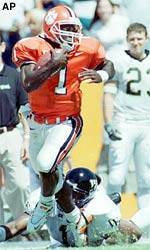 DURHAM, N.C. – Tommy Bowden’s offensive philosophy at No. 7 Clemson is quite simple, though it makes things complicated for opposing defenses.

“We try to get the best athlete the ball a whole bunch,” Bowden said as his Tigers (4-0, 2-0 Atlantic Coast Conference) prepared to play winless Duke on Saturday.

“Our best athlete is our quarterback, so we try to get him throwing and running opportunities.”

Through four games, quarterback Woodrow Dantzler has run the nation’s top-ranked offense to perfection, accounting for 1,186 of Clemson’s 2,043 yards.

The Tigers have scored 25 touchdowns heading into this weekend’s game with the Blue Devils, who have managed just two TDs in an 0-4 start.

Duke’s defense is allowing 448 yards a game – eighth in the nine-team ACC.

That unit will have its hands full trying to slow down one of the nation’s hottest players in Dantzler, who leads the ACC in rushing and passing efficiency.

“It’s as if they put a receiver at quarterback and gave him the freedom to do whatever he wants,” Duke defensive tackle Troy Austin said of Dantzler, who is averaging 123 yards a game rushing.

“You can’t be fooled into thinking he can’t throw. He can run and throw with great ability. Dantzler can run right past you if you blink.”

Duke coach Carl Franks said his defense has come up with a scheme to try to stop Dantzler.

“We’ve got a little plan that we think will give us a chance,” Franks said.

“But nobody has done it yet. When they spread their offense out, there is a lot of room for him to run.”

The Blue Devils have lost 51 of their last 63 games and now play two teams in the top 10 – the Tigers and No. 2 Florida State – in consecutive games.

“I know that is a challenge. It is a concern,” Franks said. “But our guys realize what we’re setting out to do and that’s improve each week. We can do that. We know it would be a major, major upset if we were to beat either of those two teams. But that’s why you play. You never know what’s going to happen.”

Bowden has reminded his team that Clemson is 3-3 in its last six games at Wallace Wade Stadium and 11-11 there overall.

“They’ve played close games so far. They haven’t been pushovers to anyone.”

Clemson, with its highest ranking since October 1991, has a chance to win five games in September for the first time in its 105 years of football.