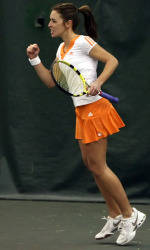 COLLEGE STATION, TX – The Clemson women’s tennis team suffered a 4-0 loss to fifth-seeded Notre Dame on Friday night in the NCAA Tournament round of 16 at the George P. Mitchell Tennis Center on the campus of Texas A&M University. The match was delayed a total of two hours and 15 minutes due to the length of earlier matches and a power outage during the middle of doubles play.

The Tigers ended their season with a 19-8 overall record after reaching the NCAA Sweet 16 for the fifth time in the last six years. Notre Dame extended its winning streak to nine straight while improving to 27-4 for the year. They advance to face the winner of the Baylor-Stanford match.

“Certainly our hats are off to Notre Dame,” said Clemson Head Coach Nancy Harris. “They played a great match tonight and deserved to win. We got off to a bad start in doubles but I thought we started well in singles. Notre Dame just began to play more aggressively.”

The Irish claimed the doubles point after play was suspended for 45 minutes due to a power outage. Clemson’s top team of Ani Mijacika and Alexandra Luc and Federica van Adrichem at flight three by an 8-2 margin to force number-two doubles into the decider.

Cosmina Ciobanu and Kali Krisik of Notre Dame won the first four games and held a 6-3 advantage over Ina Hadziselimovic. However, the Tiger tandem held serve and recorded a break to narrow the gap to 6-5. They won the first point on Bek’s serve but then the lights went out. The Irish players returned to the court strong after the delay to win the next three games and clinch the point for Notre Dame.

“We had just gained some momentum in that match when we had to stop play,” Harris added. “We were cold when we came back and missed some shots.”

In singles play, Frilling defeated Bek at flight two to put the Irish ahead by a 2-0 margin (6-2, 6-1). The Irish rookie had a powerful shot that helped her quickly gain the edge over Bek and the Clemson freshman never recovered. Laurianne Henry then dropped the first set, 6-0, to Notre Dame’s Kristen Rafael at number six and trailed by a 4-0 margin in the second before finally managing three games off the Irish player. However, the effort was too late as Rafael held on for the win.

Krisik clinched the match shortly after with her win over Tiger Alexandra Luc at flight five. Luc was leading, 4-3, in the first set before Krisik rallied to win the final three games. The Notre Dame player then carried the momentum into the second set to post the Irish’s fourth point of the night just before 11:00 pm local time.

Clemson’s Mijacika and Hadziselimovic were both nearing victory at flights one and three, respectively. Mijacika and Tefft were tied at four apiece in the first set before the Tigers top player recorded a break for the 6-4 win. She was then leading by a 4-2 margin in the second set when play was called; Hadziselimovic was just one game away from victory over Ciobanu.

Several Clemson players will be in action at the NCAA Singles & Doubles Championships starting next week. Singles play is scheduled to begin on Wednesday with the doubles competition set for Thursday.